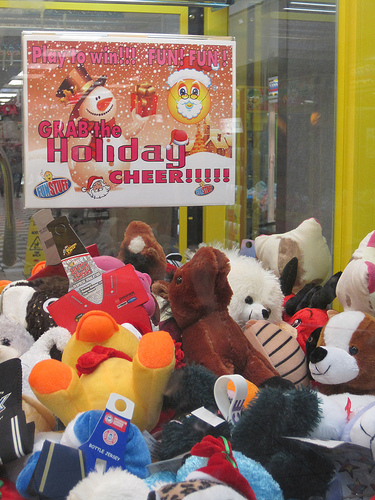 The sign makes claims of FUN (twice, with exclamation points) but it’s far too stressful to be fun.

The timer starts on a delay: a randomized silent countdown followed by a deafening buzzer.

Once the game starts the lights flicker on and off so quickly that it’s difficult to stay focused on the target.

The exclamation points keep multiplying and I do my best to ignore them.

Something brightly colored with a Santa hat and fake beard keeps laughing maniacally when I miss. I don’t know what it is but I think it’s mocking me.

Every round my migraine gets worse.

It’s so tempting to just give up.

But she really wants the pony.

There’s no other way to get the pony.