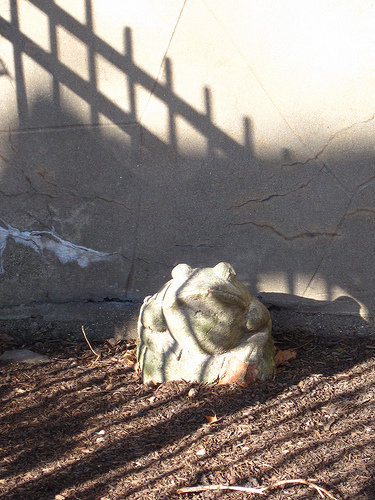 wisdom for the new year

Only three people per year get to consult the frog, so they have to hold a lottery. People used to try to line up outside his fence before the end of the year but once they started camping out earlier and earlier the city council decided to have a lottery instead.

Everyone submits their name and the council choses three at random and on the last day of the year those lucky three people have their private session with the frog, one at a time in reverse alphabetical order.

I used to get so excited about the choosing of the names, crossing all my crossables that maybe this year would be my chance for frog-bestowed wisdom. But you can only hold out hope with such small odds for so long, and eventually I only put my name in the lottery out of habit.

This year my name was picked.

A reporter came to ask how I felt (“surprised”) and someone else took my photograph and I had to sign non-disclosure forms promising never to reveal what wisdom the frog chose for me and me alone.

I was last, reverse-alphabetically, so I had to wait most of the afternoon, until the sun was preparing for the final sunset of the year, casting long shadows over the frog’s courtyard.

The guards left me alone and the frog stared at me in silence for a very long time, frowning.

Then he told me to stop waiting for permission to be happy.