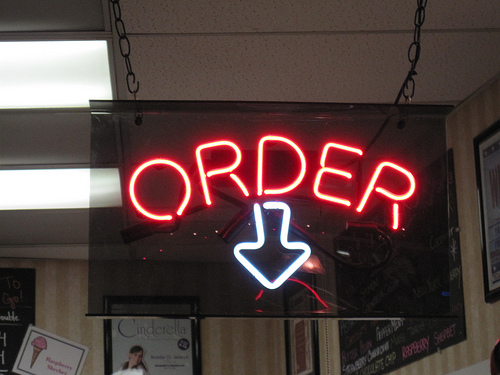 I noticed the neon sign in the kitchen before I went to bed, in that too-tired haze that also leads to mistaking the cat for a dragon. (Though I have seen the cat breathe fire, even in mid-afternoon. I don’t know much about cats and my roommate says it’s just a trait of the breed, whatever breed it is.) So I thought maybe I imagined it.

But in the morning the neon sign was still hanging from the ceiling in the kitchen and while I got my coffee I wondered what “REDRO” meant and then I realized I was looking at the back and it really said “ORDER” in glowing red over a white arrow pointing down accusingly at an unassuming square of linoleum near the sink.

“What’s the sign for?” I asked my roommate when he shuffled in wearing his bunny slippers with the dragoncat draped around his shoulders. The cat sneezed a little puff of smoke.

“It’s for ordering things,” he said, pouring two cups of coffee, one for him and one for the cat. “I thought it might be useful, just stand under it and say what you want and it’ll show up.”

I figured it was for ice cream or pizza, but it works for anything.