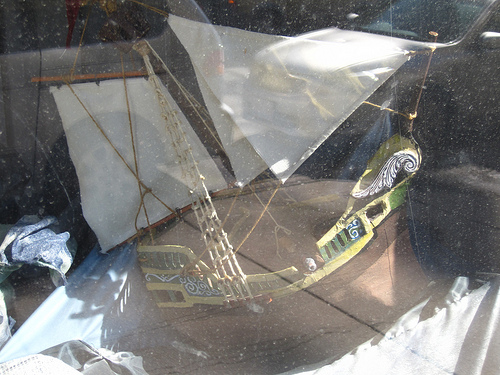 The pirate ship crashed into the living room. If the window hadn’t been open it probably would have smashed the glass, instead it swooped against the side of the couch and hit the coffee table.

My mom said she didn’t want to waste money on an exterminator because they always charge by the size of the ship and not the number of pirates, and this ship was about as tall as the couch but had a fairly small crew.

I helped her gather up all the small objects and books in the room so they wouldn’t plunder, and then we left them in there with the doors closed and the window open.

I overheard the pirates arguing as they surveyed the damage, apparently they had been attempting to commandeer one of the cars parked outside but the breeze pulled them too far toward the house.

It took them three days to finish their repairs. We left a roll of twine and some duct tape and paper clips on the carpet nearby, my mom says that’s the best way to deal with them because it speeds up the repairs. (If you just drag the whole ship outside again they get confused and start pillaging.)

I didn’t see them leave, but I heard the neighbor’s car alarm in the middle of the night and in the morning the ship was gone and there was no sign of them except the broken coffee table and the tiny empty bottles of rum.