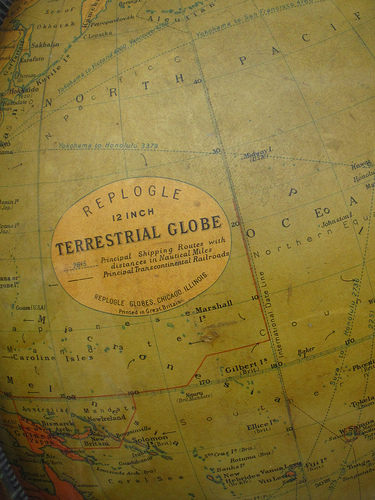 We found a round old-fashioned map on a ball so we decided to take a sea journey because most of the map ball is oceans.

Parts of it are worn off and it has lot of lines and dots and numbers, with distances in “nautical miles” which we decide are what kilometers turn into when you are in a boat.

We toss our guide ball in the air so it can have a better view of where we’re going but it always says things are in the same place when it comes back down, it is very sure of itself.

We hit rough seas and almost lose our guide which would have been tragic but tragedy was averted because we held onto it tightly enough. We make a life vest for it out of a scarf and some string and we make it wear the vest and tie it down whenever the boat starts to sway too much.

There are sharks but they don’t bother us because we are polite and also because they just had their lunch which we suspect was fish but they don’t say, they only smile.

We travel along the blue dotted line from Yokohama to Honolulu because we like the sounds of the names but we get bored halfway there and drift in lazy circles instead.

We wonder if we are allowed to visit New Ireland before we visit Old Ireland, which we cannot find on the ball and assume it must be on one of the worn-off spots but we don’t know which one and we think guessing might prove dangerous.

A mermaid gives us a little flag with a clock on it when we pass the International Date Line and we let it flutter in the wind as we sail into the future or possibly the past.

(We are not quite certain which side is which.)