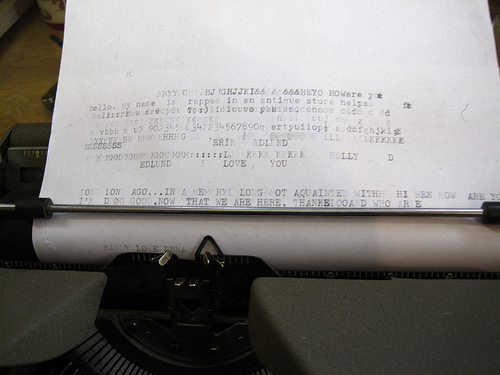 lonely ghosts in the machine

I still don’t understand why an antique store needs to be open twenty-four hours a day, but the owner is nice and pays well and since hardly any customers come in during the night shift I have plenty of time to read.

The main distraction is the typewriter.

On my second night, one of several typewriters on a cluttered display started making this dinging sound and the keys kept flipping up and I couldn’t figure out what was wrong with it so I gave it a piece of paper.

It typed a lot, though not particularly well. It said hello and made a joke about being trapped in an antique store, or at least I think it was a joke.

I asked the owner about it in the morning when he came in for the day shift and he nodded and said that particular typewriter was haunted and suggested I not give it more than one piece of paper a night.

I tried, but there seem to be a lot of voices in there and they have a lot to say so I buy extra reams of paper and let them type all night if they want to.

They send love to different people.

They make jokes and tell stories.

I think they just want someone to talk to.