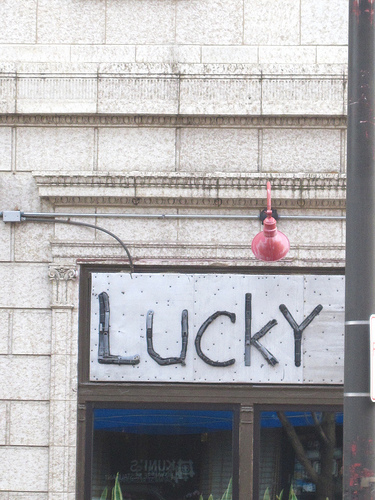 Most patrons assume the name doesn’t actually mean anything, but establishments are not permitted use of the word “Lucky” unless they have approval from the Board of Fortuity.

The Board of Fortuity prefers to keep such things regulated, though the regulations are hardly public knowledge. Often the assessments are performed without the proprietor’s knowledge, but they are always assessed if they dare to use the L-word.

(Venues that do not pass assessment meet with unfortunate ends and are often deemed “unlucky” in headlines reporting their passings with predictable lack of creativity.)

To ensure approval, something provided by the Lucky-monikered establishment must provide legitimate luck. The assessments are quite thorough and only a few pass with colors resembling flying, most barely qualify and many of those will fail future reassessments.

Lucky Cat is the most popular though the only item on the menu that contains a significant amount of luck is the Jungle Bird, rarely ordered and even more rarely imbibed properly.

Once, someone ordered every lucky pastry at The Lucky Fig and managed to cheat death three times on his way home afterward, though he didn’t notice.

The luckiest of Lucky establishments is a Board of Fortuity secret but some suspect it belongs to a jeweler who unknowingly crafts her wares from extremely fortuitous metals, as her supplier has kept this information to himself.

No one will confirm or deny this, but it has not escaped notice that every member of the Board of Fortuity wears at least one piece of Lucky Stars jewelry.