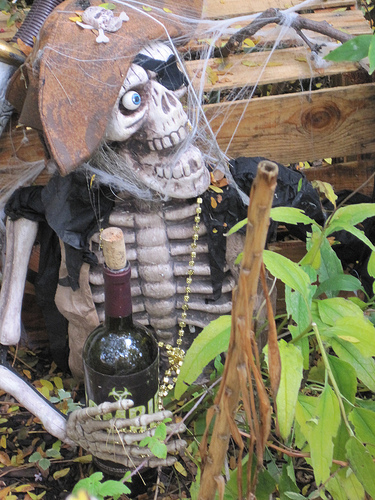 We tried vinegar and baking soda and chili pepper and citrus, a whole grocery list of alternative pesticides and they didn’t even blink, not that they have eyelids. Some of them have parts of eyelids.

There was some debate over trying something stronger but wine keeps them from causing too much trouble, even cheap wine. And they only show up in October, though once one shambled across the lawn in the winter, dragging a tattered flag and looking confused until it disappeared under a snowbank.

They’re annoying, but it’s a manageable sort of annoyance.

They flop out of the shrubbery and yell “Arrggghhh” and one of them sometimes says “Avast!” but other times his jaw falls off before he can get the whole word out and he slinks embarrassedly back under the leaves.

They sing songs we assume are supposed to be shanties but it’s difficult to discern any words so we can’t be certain.

They’re only really problematic on Hallowe’en, because of the trick-or-treaters.

We warn them that the pirates bite, but they don’t always listen.