on research and museums

I don’t really research. I was asked at a book event once how much research I did for The Night Circus and I responded “I didn’t research, I made things up.” I think people clapped.

It’s true, I mostly just make things up. For the circus I would occasionally check to make sure certain elements weren’t historically anachronistic (that’s why there’s no cotton candy, alas), though I’m sure a few anachronisms snuck in there anyway, and I relied on my own instincts from years of books read and movies seen as far as getting the tone right. And of course, my late Victorian/early Edwardian era circus exists in its own fantastical version of the past anyway.

But now that I’m back in the development stages while working on the new book I’ve been thinking about research more and I think I do research, only I view it more as digging around for inspiration than actual research-research which I mentally associate with term papers and laboratories.

I oscillate between input mode and output mode. When I’m in output mode I’m writing writing writing, usually in caffeinated marathon sessions where I rarely self-edit and accumulate lots of words. (Later there will be self-editing but we are not concerning ourselves with such matters at this stage.)

In input mode, which I’m in at the moment, I’m not writing a lot (though I will jot down random bits if they float into my head) but I am reading a lot and pondering a lot and trying to marinate in the flavors associated with what I’m working on while constantly looking for new ones to add. Unsurprisingly this mode also makes me hungry. And it is research in its way, even if it’s not all book research.

Things I have done in research/inspiration mode for the new novel have included reading lots and lots of detective novels, playing (including getting other people to play the difficult levels for me) Bioshock I & II, exploring art deco hotels in Miami, visiting cocktail bars and peering at artifacts ensconced in glass cases in art museums.

I love museums, maybe because they tend to be library-quiet and story-filled. While I was in NYC I visited the Metropolitan Museum of Art which is one of my favorite museums. (I don’t know how I managed to miss the Cloud City.) I spent a lot of time wandering around the Egyptian galleries, not particularly searching for inspirations but keeping my imagination open since there’s an Egyptian mythology flavor floating around the edges of the not-yet-novel-shaped novel. I didn’t have any epiphany moment but it got some wheels turning in my head.

And having peered in glass cases so recently, I was particularly delighted to see my author-friend Simon Toyne doing very much the same sort of research only on the other side of the Atlantic with a lovelier accent and a camera in tow.

Of course, his new book is all shiny and book-shaped and available in stores and mine is…

I should go back to researching now.

This post has been a long time coming and I suppose that’s fitting, since it’s mostly about not having time to write. Apparently that includes proper blog posts. Though this is not a proper blog post, this is a long rambling thing about what my life has been like lately.

I am not saying this is how it goes for every author, the more authors I meet the more I realize that it’s a strange sort of career where everyone’s experience is unique despite some overlapping elements. There’s a lot more to being a writer than writing, between book promotion and public speaking and signing things.

The Night Circus came out last September. I spent the weeks leading up to it doing interviews and Q&As and trying not to freak out about the whole thing. I’d also moved over the summer so I was still in cardboard box land.

From September until mid November I was on book tour, or doing book-related things abroad. This involved near-constant travel, I was never in any one location for more than a couple of days at most. I was on more airplanes in the first month than I’d been on in my entire life beforehand.

Here’s the thing about book tours: Yes they are fabulous and exciting and it’s wonderful to meet people in so many different cities but they are also physically and emotionally exhausting. I’m not sure it can be properly explained, it’s likely one of those situations that is near impossible to understand unless you’re the person in it. I feel like I have a better understanding of it now, having gone through it, and a better idea of how I react and what I need to do to keep myself sane, but it was a learn by doing sort of thing.

(And by “learn by doing” I mean “learn by having a near breakdown in the middle of an airport.”)

I am endlessly thankful that having a theatre background makes the whole public speaking thing easier to handle, but being a writer still involves more talking than I’d expected. And it’s hard to find a balance when I’m relating the same stories and answering similar questions, I start to feel repetitive and awkward and sometimes my social anxiety kicks in despite the actor training.

The strangest thing, for me, at least, and this might warrant a separate thoughtful post of its own, is the sudden transition between being the center of attention in a room filled with people to being alone in an unfamiliar hotel room.

(Side note: in two hotel rooms on my tour the concierge left a bottle of wine and two glasses. I still cannot decide if it would be more or less depressing to have a single glass. Which one is a harsher reminder that you’re alone?)

December should not count as a month off because it has holidays in it, and for most of January I was too tired to function.

At the end of January I was on a mini-tour, in a different city every day for a week, and then I had a few days off and then I was in Toronto in early February, which was actually lovely because I heart Canada.

But that means it was mid-February before I was really able to start properly recovering from tour mode.

And it would have been fabulous if that meant I could sit down and work on my next book that has been languishing for months but I also have long-neglected email to deal with and extra content type things to work on for various upcoming paperback editions. More Q&As, this time from more countries, and now people send me books they want me to read and say nice things about and did I mention that there are a few cardboard boxes kicking around from last summer and I’m likely going to be moving again this fall? I’m also just tired, still, and some days grocery shopping or laundry or putting on shoes takes more energy than it should.

Also, my desk chair is broken.

All these things take time. Sure, a lot of the individual things aren’t that complicated or time-consuming but once you start adding them up they eat a lot of time. And I need to allot time to blogging and tweeting and try to have a life in there somewhere, too.

It gets hard to separate work time from non-work time with this sort of job. I have an office (I ordered a new desk chair) but it’s not like I’m in there from 9 to 5 because I don’t have typical days so I end up feeling guilty at 10pm when I’m sitting around eating gelato instead of answering emails even when I’ve spent all day working. This is a mental thing I’m aware of but I still struggle with it, a lot. I’m trying to be better about taking weekends off.

And then there’s that added complication of having people actually waiting for this book. No one was waiting for the circus. I got to write the circus in a bubble, and now the bubble is gone, it will be the only bubble book, ever. I am thrilled that I already had several other stories in varying degrees of not-yet-novel-shaped because if I was staring at a blank page right now I know it would be worse.

For comparison: the circus took five years to write (and rewrite), and I wasn’t dealing with book tours and outside pressure while I was working on it. I am hoping that I will have a draft of my next novel done at some point this year, but right now I have a few months and then a fairly busy summer (my sister is getting married in August, yay!) and then I’ll be touring again in the fall and then it will be Mayan calendar end of the world time and then 2013 because when you reach the end of a calendar you get a new one.

I’m also not going to write faster just for the sake of having the next book out sooner. I want to write the best book I can despite the complications of time and the general busyness my life has taken on. If I can do that this year, that’ll be fabulous. It’ll also mean the earliest that book could possibly be available would be very late next year or more likely sometime in 2014, because once I’m done with it it’s still a long way from being a finished shiny book.

So yeah, that’s the rough idea of why I don’t have as much time to write as I’d like.  I am learning to make time for it, though, all of this is a learning process. I have a whole new life and I’m trying to get the hang of it but I’m still a toddler so I have tendencies to fall down and cry and need a cookie and a hug.

And if blog posts are few and far between and I’m slow on email replies for the next while, I’m sorry. I’m trying to write another book, because really, that part is my actual job.

If you read this whole thing I’m impressed and I feel you deserve a picture of a kitten. (If you skimmed just to get to the kitten, that’s okay, too.) 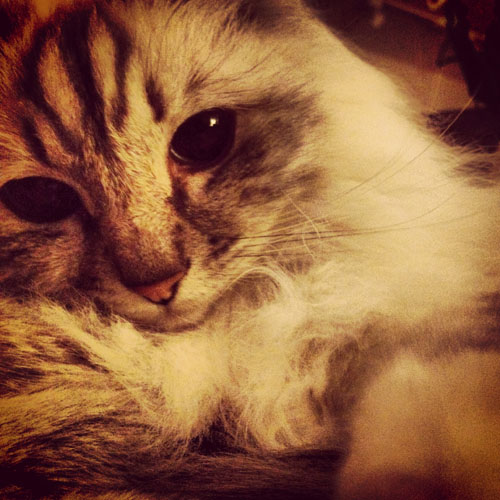 So, rather than working on anything I’d meant to work on today, I came up with a new project and spent most of my day playing around with ideas for it.

Because what I really needed was a new project. But I like this one! It has the potential to be really fun and something different for me, and as I mentioned before, currently craving change like a cravy thing.

Still need to work out details, and likely won’t have anything to show for it for a few weeks, but still. It’s nice to have things simmering.

I seem to have had a week of being productive in unintentional ways. Which is weird, but good.

Tomorrow I get to meet my parents’ new kitty. New kitty does not have a name yet, poor thing. And we will probably go see Star Trek on Sunday, because we said we were going to wait until it was out on dvd unless the reviews were phenomenal, and the reviews seem to be pretty darned phenomenal. Weekend of kitties and Star Trek. Sounds like a good weekend to me.