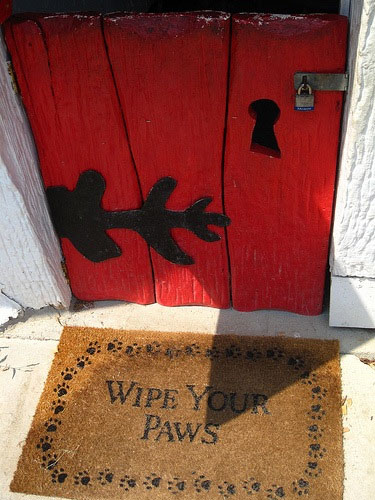 First there was the mat.

It didn’t say Welcome, but it wasn’t off-putting. And everyone knew how he was about keeping the house tidy. They wiped their paws as requested and were welcomed inside for tea and biscuits.

Then he put the plastic over the living room furniture. Even the lampshades were painstakingly covered. The teapot and the saucers wrapped like presents, though the cups themselves were left exposed for ease of drinking.

(Someone claimed he threw each cup away after it was used, but no one could be certain it was true, as he had a great many identical cups.)

Mostly, the neighbors just thought he was particular, even for a bear.

They didn’t really start worrying until he added the extra lock.