flax-golden tales: witness to the crime 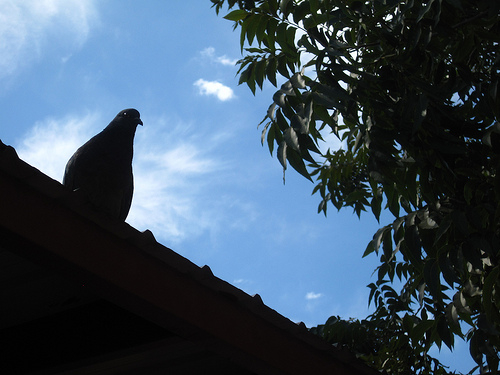 witness to the crime

They took countless precautions, accounted for every possible variation. Everything was meticulously plotted down to the last detail and after that they even waited until the weather was absolutely perfect. Clear and bright, with no wind to carry screams and convenient rain forecasted for the evening to wash any remaining evidence away.

Everything went according to plan, so smoothly that there were jokes made about the ease of the thing, that perhaps they over-planned. There were no mistakes, no missteps. The crime was carried out so quickly that there was not a single scream left hanging in the air by the lack of wind.

Of course, they also thought there were no witnesses, but the pigeon saw everything. No one saw the pigeon, as the pigeon was not an accounted-for variation in the weeks and months of planning.

Pigeons have no loyalties, and they keep no secrets. Before the rain came every bird in the city knew what had happened, their own plans already formulating.

Very inspired by your tales. Thought I might add one:

The sparkling caresses of early morning sunlight, typically a rousing and joyous time of awakening for your kind, always come too soon for you. Still, it is the searing heat of midday that is most brutal on tiny, featherless feet. Escape from the oppressive glare is nearly always impossible—bits of leaves and refuse never last as feasible dwellings.

This geometric landscape of crests and divots, red ceramic tiles sloping down to impossibly precarious ledges on all sides, is not a welcoming home but makes for a very well-constituted prison. Only in the afternoon, when the nearby tree throws its shadows on the house, is there any respite from the daily drudgery.

Your time is nighttime, those beautiful hours when obscurity and gloom gray the line between reality and wonder. In the darkness you can be anything, unencumbered by size or coloring or disfigurement. On moonless nights, even you cannot tell where your inky body ends and the world begins.

But on days like this, days full of blue sky and little shelter, you watch and wonder. Would the world ever miss you—a black bird without wings?

Hmm it seems like your blog ate my first comment (it was extremely long) so I guess I’ll just sum it up what I wrote and say, I’m thoroughly enjoying your blog. I too am an aspiring blog blogger but I’m still new to everything. Do you have any recommendations for newbie blog writers? I’d genuinely appreciate it.

Hey there! Quick question that’s totally off topic. Do you know how to make your site mobile friendly? My website looks weird when browsing from my apple iphone. I’m trying to find a theme or plugin that might be able to correct this problem. If you have any suggestions, please share. With thanks!