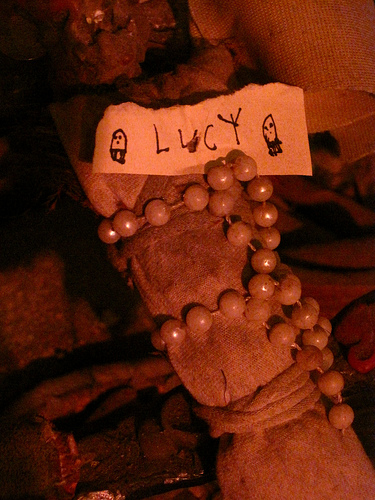 She used to say she was just a k away from lucky, that was always the joke though all things considered it wasn’t particularly funny. No one ever wanted to point out that what she really meant she was unlucky.

I had a three AM conversation at the bottom of a bottle of whiskey with someone who told me in a whisper her theory that Lucy’s death unleashed all that unluck out on the rest of us again. It sounded reasonable at the time but questionable in the hungover morning light.

Other people say she’s a classic vengeful spirit, bitter and annoyed by her passing to the point of harassing the living about it out of spite.

It probably doesn’t matter what the cause is, though, since there doesn’t appear to be a solution.

We leave her notes and pearls and almond cakes, but nothing works.

There’s talk about needing larger sacrifices. It must be done, they say, but so far no one has volunteered.

I so enjoy your writing style and the Golden Flax tales are real treasures! Have you ever thought about publishing a picture book filed with with these treasures that would set upon the desk of those that read for pleasure.

I somehow feel the book setting there upon my desk only if the the treasures were taken to the press. Love your writing … wishing you many blessings.

So, two things. One, I have that Shel Silverstein poem on a custom made print hanging above my fireplace, which is the first thing people see when they walk in my front door. That’s mostly just trivia. Two, I am on page 303 of the Night Circus, and the primary reason I am sitting here reading all of your flax golden tales is because I don’t want to keep reading your book, because if I keep reading it, it will end, and then where will I be? So I am sitting here adding unrelated chapters you could say, just so that that circus can keep existing a little bit longer. But now my soup is boiling (for the second time, because I forgot about it after I turned it off the first time when I started reading these – you see what you do?) and now I cannot stay out of the book any longer. But when it’s over, I’m going to need a lot more than soup.