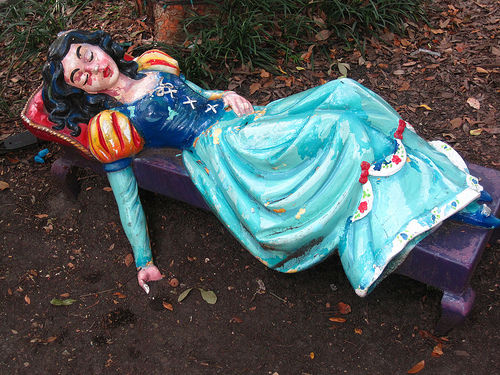 I found a princess in the woods.

I was pretty sure she was dead, but she’s asleep. She looks dead, with wrong-colored clammy-slimy skin and a decaying gown, but she has a pulse. It’s faint, but it’s definitely a pulse.

I know the proper thing to do in such situations is to wake her with a kiss and I don’t want to, her lips are covered in dirt and moss and she looks like she’s been out here for a good long time. There are bugs in her shoes. She’s clearly been rained on. Her hands were probably folded at some point but one arm has fallen to the side and the fingers are mostly buried in the mud.

I shook her and yelled but that didn’t work, not that I expected it to. I could try to drag her out of the woods, but she’s heavy.

I should probably just call the police.

Delightful! LOL… What a different take on the old (Snow White) tale, which is so much in the news, now days.

Gentle hugs,
“Be like the sun and the meadow,
which are not in the least concerned
about the coming winter.”

Maybe she doesn’t want to be woken up. Maybe she prefers the dreamworld.

By the way, I just finished your book, The Night Circus, last month. It was AWESOME! I loved it so much, I wanted to read it again right away! Also, your pep talk on NaNoWriMo was really great! 🙂 I was so excited when I saw that it was from you. You’re such an inspiration to me!

I would probably just take her picture and let her sleep!
I wanted to let you know that I finished reading The Night Circus today. I got the book in the mail from Powell’s and it was signed by you. Thanks for the great read! I did a quick posting about it on my blog for my friends to see… maybe it will generate a few more sales for you! Good Luck!