flax-golden tales: ghosts in the park 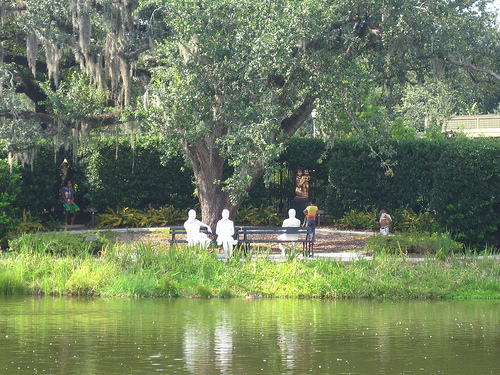 ghosts in the park

There are ghosts in the park but no one else seems to be able to see them.

When I told my mom she said “of course there are, dear” but she wasn’t looking right at the ghost lady even though I pointed.

I tested her, too. I said “isn’t her hat nice and floppy for the sunshine?” and my mom said “yes it is, she must be a sensible ghost to have a hat like that” and then I knew she couldn’t see the ghost lady because the ghost lady wasn’t wearing a hat.

The hatless ghost lady smiled at me but she didn’t say anything.

The next day there were two ghost ladies sitting on the bench but all they did was talk about the weather and politics and shoes. Neither of them had hats.

Now there’s always at least two or three park ghosts. The most I’ve seen at once is five and that day I had to yell at a bunch of kids who tried to sit on the ghost bench and my mom got mad and told the kids and a mom and two dads that I have an overactive imagination.

But the ghosts all said thank you.

If only all ghosts were so polite! 🙂

Love this one! So simple, but so lovely!

And I’ve been in the mood for ghost stories lately so this really made my day.

This one made me 🙂