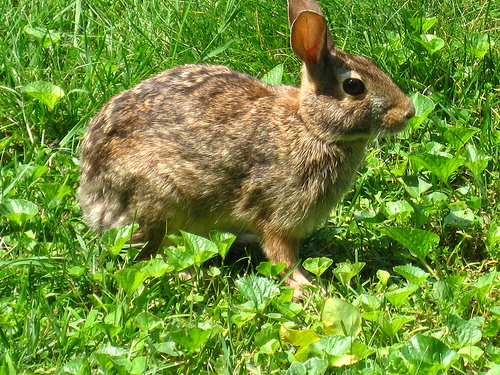 On sunny days in the spring I like to sit out in the field, usually with a book and a green tea lemonade. Sometimes the rabbits come very close like they want to see what I’m reading but this was the first time one of them actually struck up a conversation.

There were some almost-awkward pauses and a few clumsy remarks about the weather and he seemed like he might bolt back across the field at any moment, but eventually he settled down for a good long chat.

He mentioned that he doesn’t like carrots, which I found surprising but he called it a cartoon-propagated rabbit stereotype.

He nibbled clover while I sipped my green tea lemonade.

We talked about life and about change. About heartbreaks and choices and difficulties, spring-blooming, equinox rebirth and new possibilities.

He told me that he prefers to hop higher when the ground gets difficult to walk on. His tone suggested this was something of a metaphor.

In that mid-air moment, he said, it feels like flying.

Of those that I have read, this is my favorite flax-golden tale 🙂

This is the first flax-golden blog I have read, and it just made my day. Brilliant.

BOONYATA! That’s what we call bunnies at our house. Not that there are any bunnies AT our house, but… anyway.

I just have to say I loved your book The Night Circus. Bravo to you. I would love to see a movie of your wonderful imagination.

Love this 🙂 As usual

I am not expecting less from the author of The Night Circus 🙂 You put life into words!

That was one amusing tale 🙂

I love this. Almost as much as my flirtatious bunny.