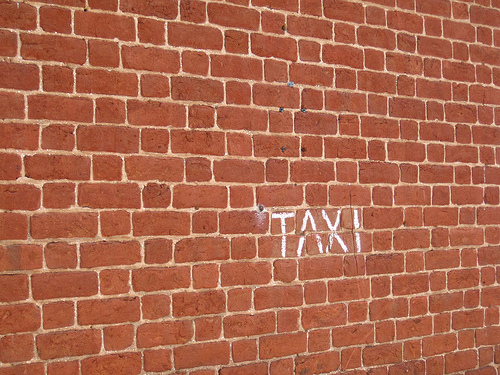 We always gave each other thoughtful gifts, it was our rule. They didn’t have to be fancy or expensive, they just had to mean something, for birthdays or holidays or just-because.

So I was a little bit surprised when my going-away present was a piece of chalk.

I did that stereotypically girly thing and assumed jewelry when the ribbon-wrapped box was so small, but sitting on the velvet cushion inside was a single piece of chalk.

“I thought you might need it,” he said, but he didn’t explain. I knew better than to ask so I just said thank you and kissed him on the cheek like always only we knew it would be the last kiss for a while and we said our goodbyes.

I put the box with the chalk in my bag and almost forgot about it.

Tonight I found it again while I was looking for a pen and opened the box to take a closer look.

It’s a regular stick of white chalk, the velvet is all chalk-dusty from it, but the chalk itself is embossed with text: Pocket Taxi Service.

I wasn’t sure how long I’d have to wait, but the car pulled up almost as soon as I’d finished writing on the wall.

Love this. How do you weave such magic in so few words? Happy Friday, Erin!

How lovely! I wonder how he knew.

Hmmmm…. wonder if there’s a piece of chalk imprinted with “pocket pizza service”. Mine’d be worn to a nub.

A lovely way to start the weekend. Thank you.

Your book has me bewitched (and I’m only at Condolences) and now I discover the pocket taxi service. Breathtaking! Thank you so much.

The photo reminded me of this