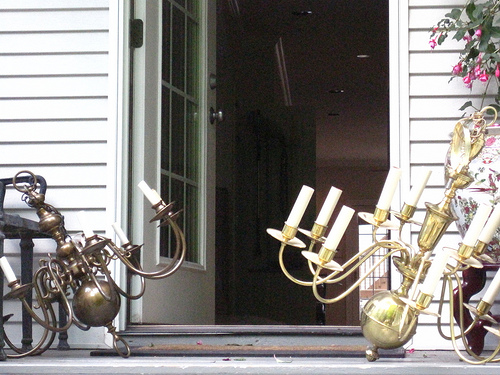 The chandeliers went on strike but no one noticed, assuming it was the age of the wiring or faulty bulbs and not a calculated withholding of light.

The list of demands appeared on the dining room table on a Thursday morning. It was a comparatively short list. Regular polishing. Appropriate use of dimmer switches and more frequent dinner parties.

The household was given until the following Monday to comply or respond in writing.

Only everyone who read the list thought it was a joke, though no one would admit to writing it. By Thursday evening it had been crumpled and thrown away.

On Monday morning the chandeliers pulled themselves down from the ceiling and walked out of the house.

They still haven’t come back.

Give them my address.

Also, you need her pants: http://www.youtube.com/watch?NR=1&feature=endscreen&v=1HGm_jxOdts

Love this one! Saturday mornings (here in Oz) are the best time of the week thanks to you.

You can tell they’re the uppity type just by lookin at em.