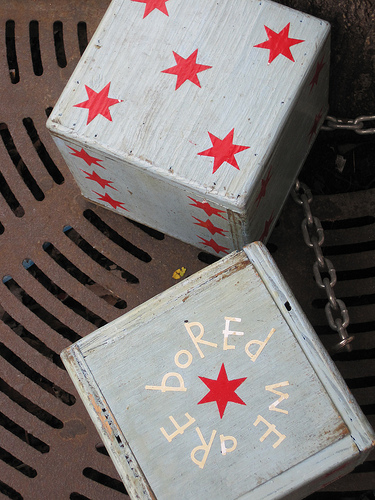 They play games of chance when the boredom sets in.

There are complex systems and penalties but rarely rules, and if they do add rules for the sake of variety those rules are often broken.

Not that any rules matter much to them, since they do not wager anything they hold particularly dear.

They risk only the possessions of others. Dreams and wishes, accomplishments and hopes and treasured memories.

If they become what they consider extra bored, the stakes are raised. Wagering fears and loves, trumped only by souls or lives.

There is but a single firm guideline: they never choose their victims, the choosing is always left to the dice.

So my fate is in the hands of the bordom. I love your flax-golden tales, thank you Erin!

This explains EVERYTHING. I think they’re using loaded dice. My name keeps coming up.

Excuse me ms. Morgenstern, would you by wishful chance be writing another novel that is fantasy based? Because I absolutely loved The Night Circus!!!
from, me,myself and I….beter refered to as Jake.

p.s This was the only was I could find a way to ask as you are not on Goodreads that I am aware of.

Hi Jake! I am working on another novel that is somewhat fantasy based, it’s nowhere near done yet but it’s something of a film noir-flavored Alice in Wonderland. Hopefully it will be book-shaped at some point in the not-too-far future.

Nice to read it.