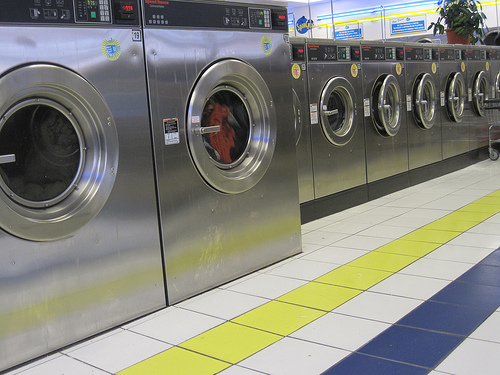 I let my laundry pile up for two weeks before I finally relented and took it to a laundromat, after leaving yet another message for the landlord about the constantly out-of-order machines in the building basement.

I had to look up the nearest laundromat and when I reached the address it wasn’t a laundromat any more, it had been converted to a hat store that still smelled a bit like soap but the hat guy told me how to get to this other laundry place that looks like it’s been here forever even though everything is really bright and shiny.

The machines are all modern and fancy and I can’t figure out where the coin slots are but there’s a lady with bluish-grey hair and cat-eye glasses reading Dostoyevsky behind a counter so I ask her how the machines work and she asks me what it is that I want to wash.

I look down at my bag of laundry and then back up at the lady. Her hair is so grey-blue it’s almost purple.

“Clothes?” I say, and her smile switches to something that looks condescending and pitying at the same time.

“You want the ones behind the blue line,” she says, using Crime and Punishment to gesture in the direction of the line of colored tiles between the rows of machines.

“What do the ones behind the yellow line wash, then?” I ask, pointing at the identical row of machines along the wall.

“Pasts,” she says. “Except for the ones down the end, those are just for sins.”

Wow, little shop of horrors! Great short to bring in the Fall season!!

I couldn’t help but smile while reading this! Thanks Erin!!

So much story in so few words. I love this. Fabulous.

Once I had a use a laundromat, but it smelled like dirty synthetic wigs, so I bought new stuff at TARGET instead….. But I love these evocative tales…Give us more!!!

Oh Erin, you master of ‘the twist’ you… 🙂 You inspire me so that writing is like putting on my dancing shoes – because above all it should be fun, even if it’s dark and truthful. A toast to wry smilers everywhere, and the people who make them smile. Xx

Erin Morgenstern, you rock. Your long version biography is super cool. I absolutely love your book + it is on my shelf of much loved and wonderful books. Please write another so I can give ‘The Night Circus’ some more Erin Morgenstern company. It’s not exactly lonely (I have a lot of books) but it would be nice to see another book by you on my shelf 🙂 If you write it, I will read/buy it. Please write another novel.

*I would also like to add that I originally read your book because I heard it was a NanoNovel-not sure whether or not this is true but it is rather inspiring. I should also mention I read it about a month after it came out, and I just wanted to add I like the original book cover design better than the new one.