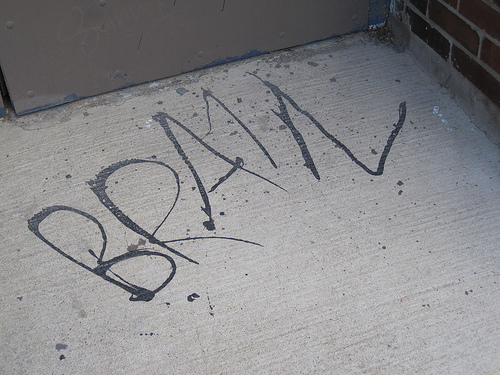 The Brains didn’t bother me, probably because I knew what they were.

But everyone else in town has zombies on the brain—so to speak—so I guess it’s not entirely surprising that everyone’s thoughts went in a brain-eating direction.

So when the word “Brain” appeared scrawled over pavements and doors and walls—some with exclamation points, others eerily lacking punctuation—everyone started yelling about zombies.

I keep waiting for someone to figure out that my brother Brian is a self-centered lousy speller prone to defacing public property with paint, but they seem distracted with building barricades and stocking up on ammunition.

I should probably tell them.

I hope they take my word for it, since I can’t find Brian anywhere.

Hehehe that was a nice Halloween-y twist.

Just read the Night Circus and loved it Erin, just a matter of time and it will be a film. Actually inspired my theatre instincts, would love to do it as a show at the Edinburgh Fringe Festival as an experiential type show!

Love it! Such a fun mix of humor and Halloween shivers. Perfect.

[…] Erin’s blog on a Friday. I’ve only started reading through the stories, but I do love Brain. It is a very interesting idea, and I’ve been thinking about it a lot since first finding the […]