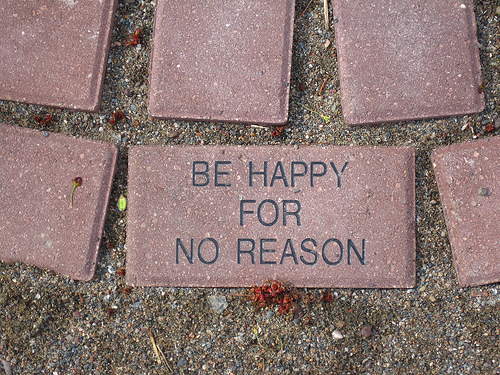 be happy for no reason

It didn’t take long to learn to keep my head down so I wouldn’t have to look at anyone during my walk, and the fact that it meant no one could tell if I was crying was an additional bonus. It was easier, really, since the pitying looks of passersby only made me feel worse.

Staring downward, I counted bricks until I knew exactly how many I stepped over during each possible route.

I continued to stare at the bricks even after they’d all been counted. For a while I tried to find patterns in cracks and chips and uneven corners.

Anything to avoid looking up.

Then the bricks started talking to me.

I thought the messages were random diminutive graffiti until they occasionally addressed me by name.

Some days they spout fortune cookie-esque wisdom, other times they compliment my socks.

I take extra walks now, to see what the bricks have to say, and sometimes I get so distracted by looking for the messages that I forget to cry.

5 Thoughts on “flax-golden tales: be happy for no reason”