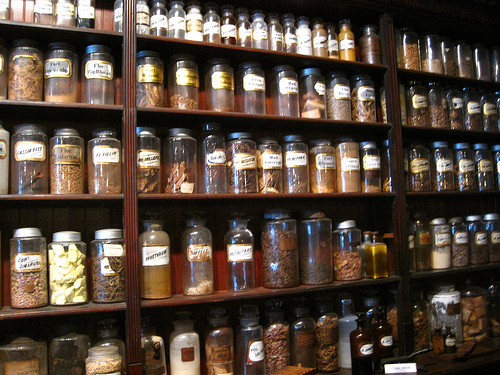 I made lists of meanings and astrological correspondences but now that I’m in the store I feel lost.

There are so many shelves and faced with all the ingredients in separate jars and bottles I’m instantly overwhelmed trying to remember how they’re supposed to be combined and what everything means and what it is I need.

And I don’t really know what it is that I need so I stare at the faded label on a jar of white sage and try not to cry.

The shopkeeper, a tall guy with cobalt blue dreadlocks and a nice smile, asks me if I’m okay and I manage a nod.

I expect him to ask me what I’m looking for so I try to come up with a proper answer. Protection, maybe. Or revenge.

But he doesn’t ask, he just offers me a cup of yerba mate tea with lemongrass and suddenly we’re talking about how tea tastes better when served in proper cups rather than paper ones and discussing literature and cinnamon and fate.

I don’t end up buying anything, he won’t even let me pay for the tea.

As I’m leaving he gives me a single violet from a pot on the windowsill and tells me that living well is the best revenge.

One of the things I love about living in NYC is that there are entire other worlds here, where you can forget that you’re in the middle of Manhattan and feel like you’re somewhere else entirely.

We went to the American Museum of Natural History today. I haven’t visited in a very long time and I’d forgotten how wonderful and maze-like and fascinating it is.

We saw a lot of whales in a fabulous exhibit that we were not allowed to take photographs in. (The whales kept reminding me of The Rathbones which I can finally tell you to read in about a week and a half.)

I learned that sea otters have the densest fur of any mammal. I became enamored of a tiger and a fluffy-footed owl. I found things that inspired writing ideas in shadowy corners when I wasn’t even looking for them, but maybe they were looking for me.

And of course, we only managed a fraction of the galleries, so we shall have to go back. 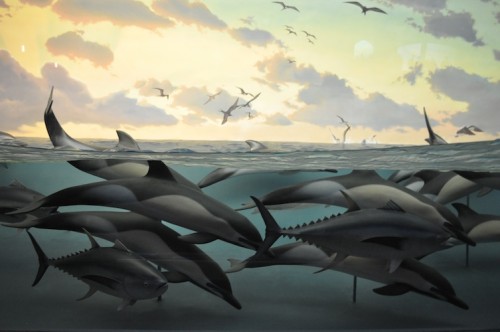 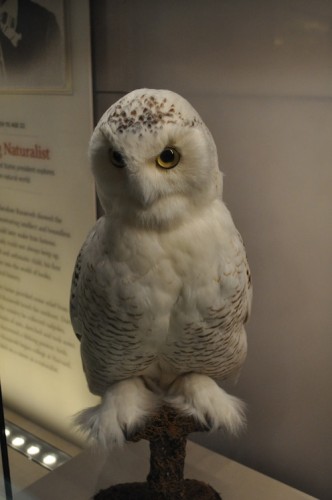 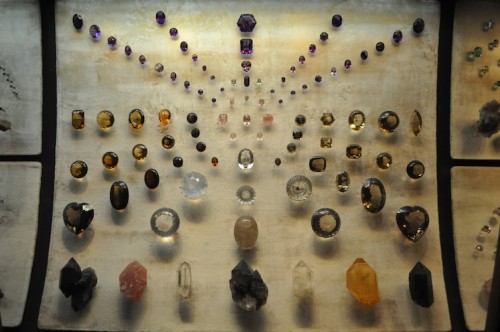 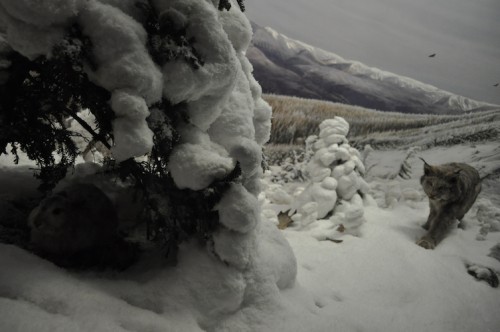 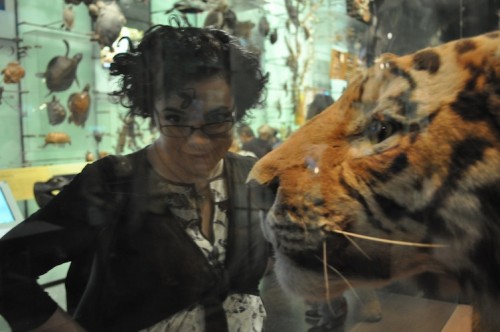 (All photos are Adam’s, he brought his camera and I just had my phone, though I did get a good Instagram of the lynx.) 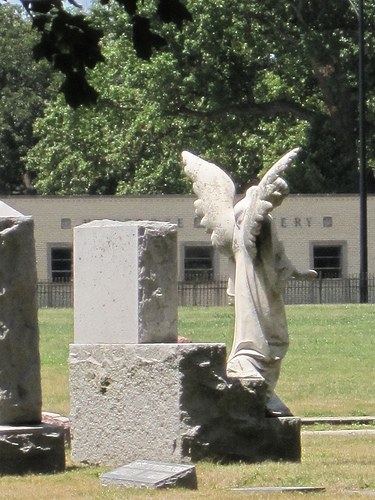 The angels left the cemetery yesterday, I don’t think anyone saw them go except for me. There were other people around but they all seemed preoccupied with thoughts and stones and flowers.

The angels stepped down from monuments and mausoleums and walked quietly away.

One of them passed by where I was sitting and left a single feather in its wake, soft but cold and grey as stone. I pressed it carefully between the pages of my notebook but it was gone when I got home.

Today the news is calling the disappearance thievery or vandalism or performance art.

I doubt they’d believe me if I informed them that the angels left of their own accord.

Besides, it’s not my business. I’m sure the angels had their reasons.

Perhaps they were needed elsewhere.

So remember back in May when I fell in art love with Ellen Jewett’s sculptures?

I ordered a custom one. 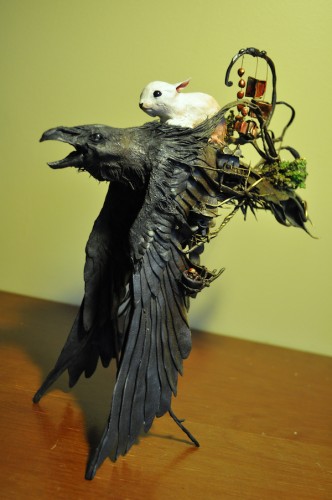 She does what she calls “creature stacks” so I asked for a raven and a white bunny and mostly left the rest of it up to her interpretation. I could not possibly be more delighted with what she came up with. 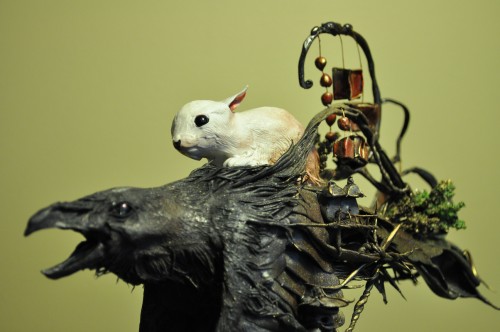 They live on the mantelpiece now. Maybe someday they’ll tell me their names. I have a feeling they have a story. 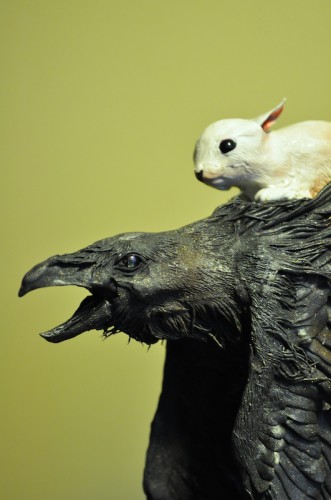 (More of Ellen’s creatures can be found on her website, deviantART & custom work is available from her Etsy store.) 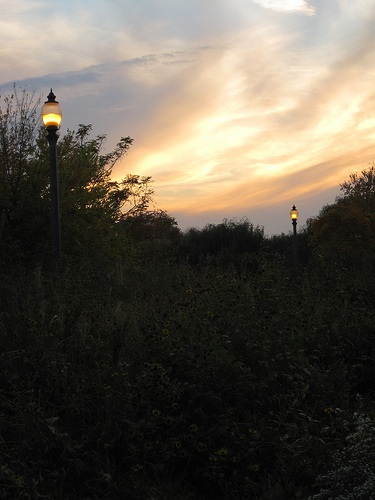 lights that guide the way to destinies untold

The path is there, somewhere.

Or so they tell me.

I suspect it is a gentle lie to strengthen my belief.

Sometimes I can trust that there is a path set out for me to find.

Because I can see them in the dark. 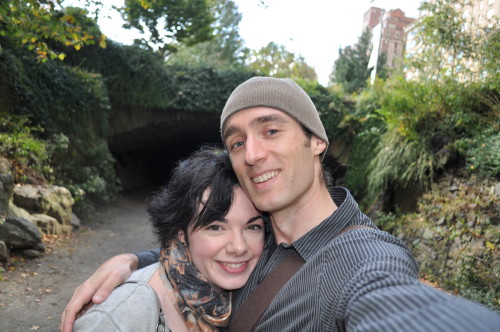 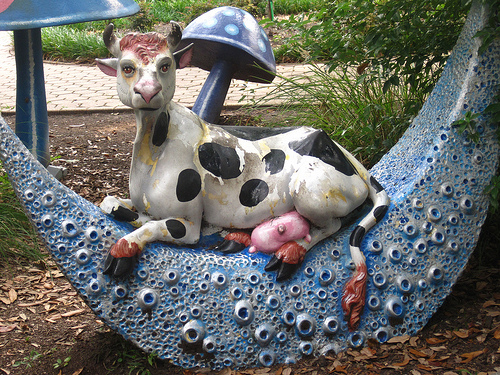 Thomas Gray was a renowned 18th-century English poet best remembered for his “Elegy Written in a Country Churchyard.” It was a short poem — only 986 words, which is less than the length of this horoscope column. On the other hand, it took him seven years to write it, or an average of 12 words per month. I suspect that you are embarking on a labor of love that will evolve at a gradual pace, too, Cancerian. It might not occupy you for seven years, but it will probably take longer than you imagine. And yet, that’s exactly how long it should take. This is a character-building, life-defining project that can’t and shouldn’t be rushed.

Thank you, Rob Brezsny, for making me feel better about this not-yet-novel-shaped thing taking so long.