November went and flew by like a flying autumnal whoosh of a thing and I am sitting here looking at December somewhat skeptically. But I did have a just-barely successful NaNoWriMo, and I am impressed with myself considering how long it’s been since I’ve participated and how many days I had to skip entirely.

I stayed more on-pace than any other NaNo I’ve done before, mostly because I just didn’t have time to get my standard head start. I had lofty goals of maybe doing more than 50k but I ended up right on target. This is a screencap of my day-to-day handy chart from the NaNo site: 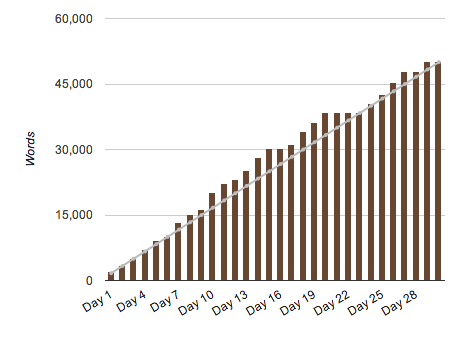 I had planned at the outset to be all NaNo Rebel and work on two different projects but I didn’t really do it the way I intended. I spent the first half of the month working on a new thing and then thought about going back to the other novel-in-progress but decided to work on the new thing more instead.

I write out of order, which is good for me but not necessarily the tidiest way to approach a draft of something. So in the middle of all the bits and pieces I started some other pieces and I somehow ended up with about 15k worth of stuff that does not belong in this particular new thing. I think I accidentally wrote background mythology for an entirely different thing, but I don’t know what that different thing is yet. I like those bits, though, so I will keep them safe and fed and watered until I figure out what they want to be.

The rest of it is… not a novel. It’s not even a draft of a novel, it’s 35k of stuff that I might be able to polish into the beginning of something that could maybe someday be developed into a novel of some sort. It all needs a great deal of work. I haven’t re-read any of it yet but I’d guess that maybe half of it is useable. There are individual scenes and moments that I like a lot. I’m going to put it away and go back to the other novel and then when I have more time I’ll pull it back out and see what works and what doesn’t and figure out what I can play with further.

It was fun, overall, though I am out of practice and it was harder to get out of that self-critical headspace than it used to be, but at the same time I think I trust my instincts more. My favorite part was still there, too: the finding of things I wasn’t expecting, in that whirlwind of imagination exploration.