I had a busy, marvelous weekend. Hallowe’en has exploded downtown already, with crowds & costumes & small dogs dressed like turtles. I had a caramel apple! And I made more apple goat cheese tartlets. And apple blackberry crisp. It was an apple-y sort of weekend.

We had company from out of town that came to see the craziness, along with a wonderful puppy who was not dressed as a turtle. We had a fabulous time.

And FYI, to anyone who might visit me in the future and be so kind as to bring me giftage: you have been preemptively outdone. Forever. Sorry.

Because I now have a vintage typewriter. 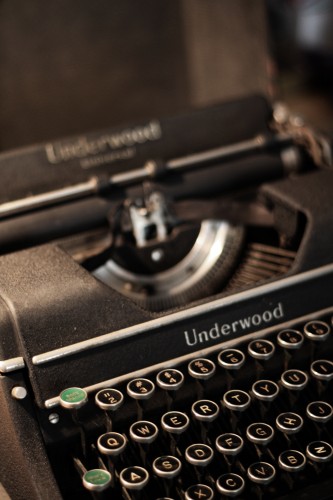 I have been occasionally petting it in between taking sexy typewriter photos. I have wanted a vintage typewriter for ages and now I have one of my very own because awesome people are awesome. I will likely pet it more than type on it, but that’s okay. It can sit on a table and look pretty & writerly. 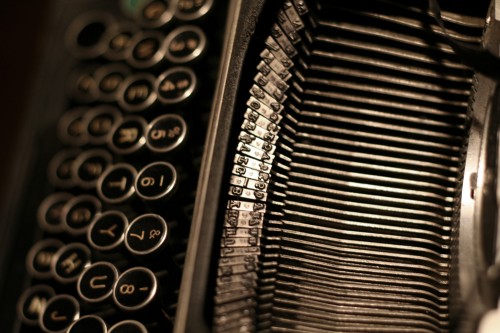 It appears to be in decent working order, though a few of the keys are askew and it needs a new ribbon. Which I can order, because the internet is magical.

Also this weekend, my book contract arrived. I feel all official.

And now it is Monday, as it often is after weekends, and I am back to coffee & Revisionland.

I bet you have the more risque photos set to slide-show on your desktop, don’t you? Those saucy twisted keys, the secret shadows drawn by the undercarriage…

Have you patiently spaced over for the “ding!” when you hit the margin yet?

Well, I hadn’t thought to put them on slide-show, but now that you mention it…

Though I may have giggled delightedly when it dinged. Possibly.