I am always surprised by these last days of the year. They sneak up on me, hiding behind the holidays with a brand new year in tow. I think, “wait, what?” and then it’s January. Every time.

This year is probably worse than most, though, since the last few months have been so busy, though the fall tour is already seeming like a dream in these dwindling days of 2011. I know there are stories that I meant to share that never made it onto the blog (I had such grand plans to do a blog post per tour stop, I really did) but I suppose this will have to do, a late December post of camera-caught images and a few already gone moments in between.

Being on a book tour is a travel tease, you get to see cities from car windows and rarely if ever have proper time to explore. I found this particularly frustrating since I haven’t traveled much, but at the same time it’s like having a little sampler platter of cities. During my second trip to Toronto I had some free time and actually got to see the city from very high up: 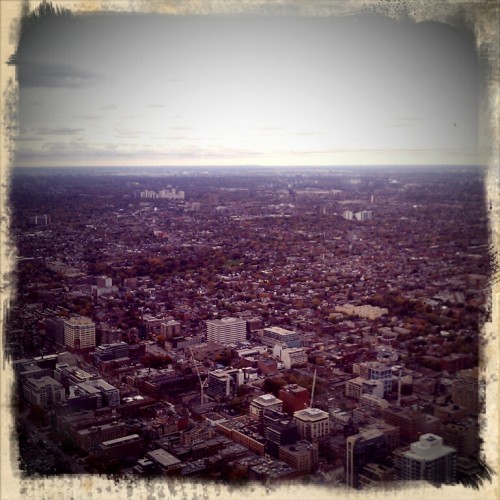 One of many views from the CN Tower. I did get to see a fair amount of the city from the ground as well, including a lot of really good food, but it was the only city where I got to have a proper very high view.

Also falling into the interesting view category, on my second very short trip to London, this was the view from my hotel room window: 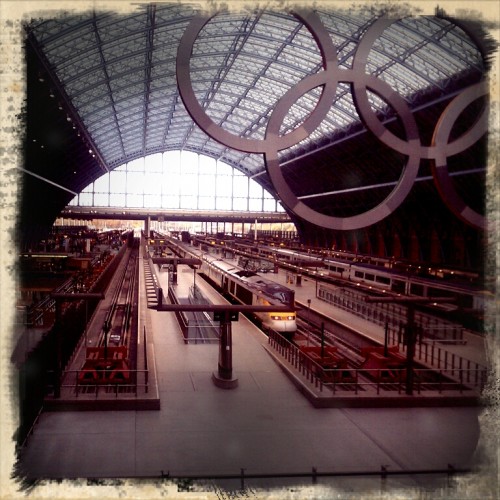 For those of you playing along, that is St Pancras station, and I was staying at the hotel that is the former Midland Grand, both of which appear in The Night Circus. Also I don’t believe I mentioned before that during that 24 hour trip to London I unexpectedly met Audrey Niffenegger because we both happened to be having lunch in the same teeny tiny restaurant and this is apparently the kind of thing that happens in my life now and also she is delightful & lovely.

I thought about doing book tour hotel superlatives, like Yummiest Room Service Breakfast (Raphael Hotel in Kansas City: portobello & goat cheese omelet with a parmesan potato cake!) or Largest Hotel Bathroom (the Alexis Hotel in Seattle, I have lived in apartments smaller than that bathroom) but then there were too many lovely hotels and I got into weird categories like Most Swoon-worthy Elevator Doors: 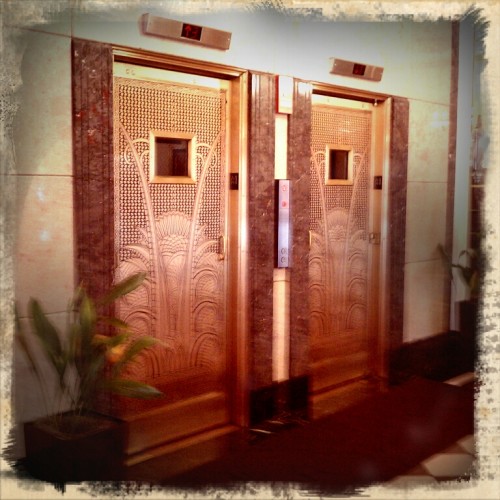 The Ambassador Hotel in Milwaukee, all fabulously art deco and you have to pull open those doors, of course. I have a thing for art deco anyway, I think the desk lady thought I was weird when I kept taking photos of the elevators and the light fixtures.

Also while in Milwaukee (in Oconomowoc, technically) I had an event I can’t say was Best or Favorite but it was a particularly nice, something extra thoughtful in the post-reading discussion, maybe I was in a thoughtful mood because I’d found out that Steve Jobs died just before we started (The Night Circus was written on several different Apple computers) and I don’t even remember everything I talked about but it stands out in my memory nonetheless.

There are so many things it seems like too much to have occurred in such a comparatively short amount of time. So many wonderful booksellers and red scarves and readers, it is still so strange to me that people can visit a place that existed in my head for so long, and it is so many people in so many different places. Maybe that’s why I am still dizzy from everything despite the fact that I’ve been post-tour for a while now, though the holidays are always dizzying in their own sugar plum way.

I took this photo in Austin, Texas: 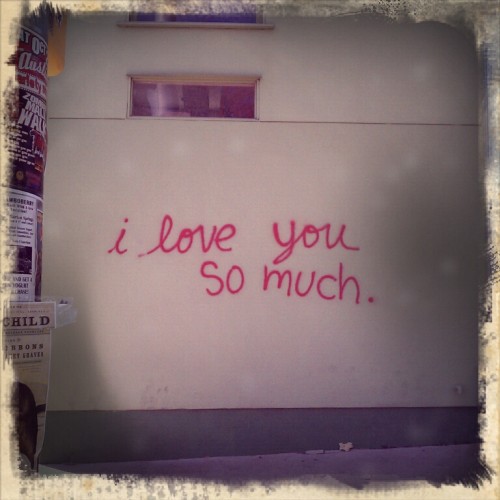 I think perhaps it’s my favorite photo of the tour, for a lot of reasons but mostly because of that “so much” added in different handwriting. That’s what the tour was, really. That’s why it’s difficult to capture in words and pictures after the fact, because it was so much. So much. People and places and airplanes and books and wine and chocolate mice and love.

Oh my goodness I love those elevator doors! I would have taken a million pictures of them too.

The Alexis hotel is amazing. I never stayed in it, but it has the library bar and the bookstore bistro or something. I couldn’t believe that a hotel that shares my name had a library bar in it. It is the most appropriate hotel for me! I stood in front of it for pictures.

However, my cousin lives in Seattle, so I will probably never stay in the Alexis hotel.

Lovely photos. I would have had a hard time tearing myself away from those doors as well, and that wall. Wow. Thanks for sharing.

I think you’ve done an admirable job of capturing the fleeting essence of your travels. Love the photos and the musings. 😉

(BTW – I’m a fellow weirdo when it comes to taking pictures of elevators and other interior design elements. My beau and I stayed at the beautiful and venerable Frontenac in Old Quebec last February and I have several pictures of elevator doors, old-timey mail chutes, and various wall sconces to prove my obsession with these architectural details. They just don’t make things like that anymore.)

So much seems so wonderfully so much. I took a chalk drawing of a the word “Dream” in a cloud on a pavement a really long time ago. The “I love you” wall with two distinct handwritings is definitely a favorite because of what this year made me lose.

Great literature is supposed to make us feel the human condition, become self-aware of our own lives onto the canvas of the world. Your words definitely do that, erin.

I just finished reading, “Night Circus” and it was beautiful. I enjoyed it very much.

I just wanted to mention that I happen to be dating a version of you. My girlfriend, a fabric artist (www.margaretforsey.com), looks strikingly similar to you, is also a Cancer, and if she ever wrote a book, it would be just one sideways shift in aesthetic away from your work, with very similar intention, just less silk and crisp bow tie, and more organic flower bed and bees wax candle. But otherwise the same. It’s hard to explain. Her favorite films are silent and thinks she might have been a flapper in another life.

I know her really well, and so it was a peculiar experience to read Night Circus; it was like seeing a story through her eyes but from a slightly different perspective.

Sometimes it is too much to come face to face with another aspect of oneself. I find it personally off-putting and I avoid it; I’ve had to deal with it once. I think there is a good reason our fragmented parts work and learn separately, but it is also worth taking brief notice, if only for educational purposes, when we come across them from time to time. So I just felt it would be. . , courteous (?) to mention that this other piece of you is doing well over here, that she is kind, smart, gentle, witty and socially admired. And loved very much.

Thank-you for the stories!