This year was too full to be easily condensed into a December 31st blog post.

Everything looks different than it did this time last year, and only partially because I have new contact lenses.

I have a new life, in so many new ways.

Only one star in my hair this year. That’s as much as I can handle at the moment, though I also have the moon around my neck. 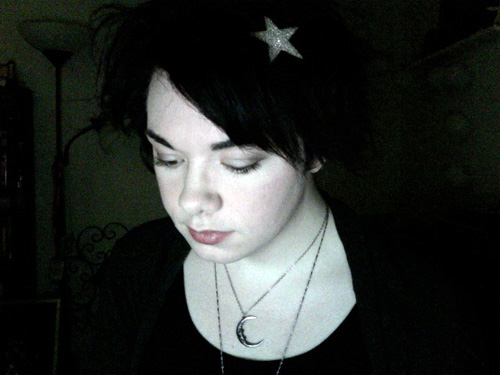 (I suppose now I have some sort of tradition of New Year’s Eve webcam photos in which I don’t look at the camera.)

I thought a lot about what the song of the year was, but in the end there wasn’t any competition.

All good things for 2012. I wish you some well deserved rest.

My song of the year was Florence and the Machine’s “Shake it out”. This was also the year I rediscovered music, which was great. I don’t know why I had neglected it for so long.

i love that iron & wine song.

my song of the year was “uberlin” by r.e.m., and i’m still trying hard not to be depressed that this year will probably be the last year accompanied by a new r.e.m. soundtrack. old habits die hard sometimes.

wishing you a peaceful and beautiful 2012. my camera and i will be searching for new stories for you. <3

On the last day of 2011 I read your entire book, The Night Circus. I want to tell you that this was the most wonderful book I have ever read, and I am not exaggerating. You write magnificently and to read the details of your imagination made me wish we could sit down for coffee and I could continue to hear the beauty of words as you put them together. Thank you for enriching my year with your book. Thank you for sharing with us the beautiful night circus. I wish you the best in 2012.

Erin, I hope that your 2012 brings you more joy than you can currently imagine, and less stress than did 2011.

May it be full of pumpkins and chocolate and fluffy kitties, preferably not at the same time. <3

I read, relished and LOVED Night Circus before it was released (advanced reader copy). I hope you see this note because I want to plant a seed in your mind. If your story gets made into a movie, would you please, please, please do all you can to get Baz Luhrmann to direct!? He’s the only one I can imagine making this book into a film and doing it right. Best for 2012.

Happy New Year! May this year be even better then last year. My song of the year was Gimmick by a Japanese band called Sadie. I’m hoping to complete my story The Pipe Fox’s Dream this year. It probably won’t hold a candle to The Night Circus. Have a good year! P.S I always wear a crescent moon necklace and carry the tarot card the Moon with me, to remind me to always keep to my dreams. Yes I’m weird like that. Especially considering the reversal meaning of the card.

Thank you for such a lovely book. I cannot wait until the next one. Incidentally, I think I’ve found a member of the Night Circus.

Sadly belated reply but this was fantastic! Thank you so much for sharing.

T.S. Eliot said something about beginnings often being endings, and that to make an ending is to make a new beginning. Something like that anyway.

I hope that your new beginning is a magical one.

PS: I don’t think you ever have to worry about being forgotten – I still have dreams about the Night Circus over a month and several other books later…

omg. that song. Lisa Hannigan introduced me to the song (i cant believe I didn’t find it on my own given my love for Iron & Wine) and wow. That song…it expands ten minutes into a sispyhean loop of evenings and nights and morning…

I don’t think I have said this cliched, cheesy greeting of the turn of 12 months to anyone this year (let’s just use your bottles metaphor to explain this) but I’ll say it to you, Happy New Year, Erin :’)

Beginnings only spring from endings – we always have to let something go or leave something behind in order to reach for something new. Here’s to both and a bright, sparkly New Year for all.

Happy new year to you! Yours was my first book of the year and I enjoyed reading every word. Thank you for sharing your magical world with us! I gave your book a shout out in my blog and I hope that everyone I know reads and enjoys your book as much as I have. Thanks you!

Just wanted to say thanks for introducing me to The Trapeze Swinger (and, indeed, Iron & Wine). I may or may not have listened to it a bazillion times in the past 24 hours. My neighbours may or may not hate me now.

(Also: I got The Night Circus for Christmas and have finally had a chance to start reading. Love it so far. Congratulations on everything.)

I finished Night Circus Today. I enjoyed it very much! Thank you so much for writing it. I hope you have a wonderful year and I look forward to the next book.

Night circus was that exquiste respite I’ve been trudging through bookstores for years in hopes of. Splendid – not a word I take lightly.

My thanks to you. What bold adventures will next transpire I wonder with you at the helm? Happy trails, best of fairytales….

A very good friend lent me her copy of The Night Circus. I finished it in one day as I could not put it down. Now I am truly saddened that it’s finished~as though I’ve had to say goodbye to people very dear to me. Your work is exquisite and I thank you for sharing. If this work does become film, please please PLEASE oversee every step so it stays true to your work. If this does not happen, it will be an utter failure & huge disappointment. I look forward to more works of greatness from you to lose myself in. Thank you.