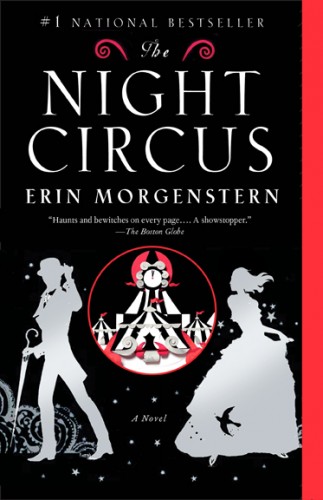 What a fantastic cover for the US paperback version! The original hardcover cover drew me in and made me pick up the book. This one is even better. Congratulations!

It’s sort of a combination of the UK and US covers, isn’t it? So pretty!

I just loaned my hardcover to a close friend. She’d had it on loan from the library but it was overdue and she was desperate to finish it. We spent all of lunch hour the other day at work talking about it…

Hey girl, the paperback looks swell. Looking forward to more in-depth posts from you. Thank you for the well balanced list. Those are hard to come by in this day and age.

Oh great! Will you be doing any signings for “The Night Circus” at Book Expo this year? I thoroughly enjoyed it when I read it a couple of months ago. I’ve learned a bunch from the way you describe things so it’s clear. That’s one of my Achilles heels when it comes to writing.

And the hard cover is so lovely! I do love the UK covers as well, they’re interpretation is always interesting to see versus the US versions of texts.

Hope you have a great vacation and to see you at Book Expo next month.

Beautiful cover, although I still adore my hardcover version.

What’s most important though, is the story that lies within it.