here, there, everywhere (but not really in Chicago)

I keep unintentionally neglecting the blog because I have been a whirlwind of travel lately and spent most of last week not knowing what time it was.

I went to Naperville, Illinois for a fantastic bookstore event, and then spent a day running around various nearby Illinois locations for Fox Valley Reads which was a wonderful community reading event and I had a lot of fun babbling about all things circusy.

So I was near Chicago but not actually in Chicago. I don’t think I can fairly say I’ve been to Chicago, and I very much want to go back to visit properly. I wanted to see that giant shiny coffee bean-looking thing.

But while I was not in Chicago there was a Miraculous Event!

If you have been reading the blog for a long while or a little while or at all, you have probably noticed that I write teeny stories called flax-golden tales and that I write them based on fantastical photographs by Carey Farrell.

Carey and I have known each other through the wonderment that is the internet for over a decade, but we had never ever met in person before last week outside Chicago. 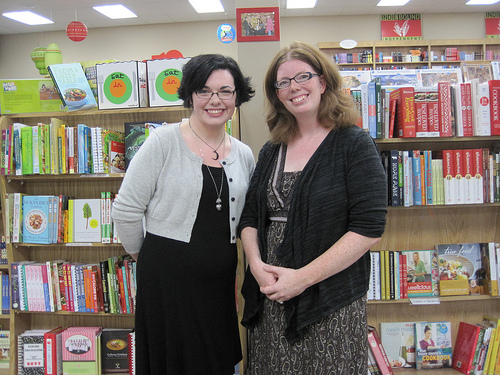 Proof! We are both real people! With glasses!

Of course, she could have been a book-induced hallucination that manifested in photographic form, but I think she’s probably a real person and a lovely one at that and I am delighted that she is both real and my friend.

From not-Chicago I headed to actual Portland, Oregon, a city I had long thought mythical and I’m still convinced it might be, since during my two days there I sat in at least three different shiny red vinyl armchairs and also had dinner with Katherine Dunn. Not at the same time. I was in the mythical Land of Port for the Wordstock festival which was very fun and somewhere they now have quite a few photos of me draped across one of the aforementioned shiny red chairs.

Then I was back in Boston for a little over 24 hours including a field trip to New Hampshire to procure a rather fantastic pumpkin (I will take a picture of it when I get home) because it is October, after all, though now the pumpkin is patiently waiting to become a jack-o-lantern while I am in New York for a few days for reasons various and sundry.

This weekend I will be back in Boston for a bit and then off to London for a dark and decadent Hallowe’en evening with Audrey Niffenegger at The Prince Charles Cinema.

And then it will be November. Strange how that happens.

For now I am going to have a cappuccino and run off to enjoy the beautiful fall weather in Manhattan while it’s still here.

OMG! You and Audrey Niffenegger on the same stage! Wish I could be in London for that. Alas, I reside in Not Really Chicago land, where I saw you at the Fox Valley Reads program at Oswego High School. You should have Audrey take you to Highgate Cemetery (if you haven’t already been) while you’re in London. No more atmospheric place in London as far as I’m concerned. And you can say “hi” to Douglas Adams, George Eliot, Karl Marx, et. al. You were great in Oswego, by the way. I loved hearing about your creative process. I especially loved the fact that Celia was such a late edition to The Night Circus.

I wish I had known you would be in Naperville! Would have given me the perfect excuse to finally make a trip there!!!