This time last year I had no idea where I’d be tonight.

I certainly never expected to be sitting in front of the fireplace in my new Manhattan apartment. 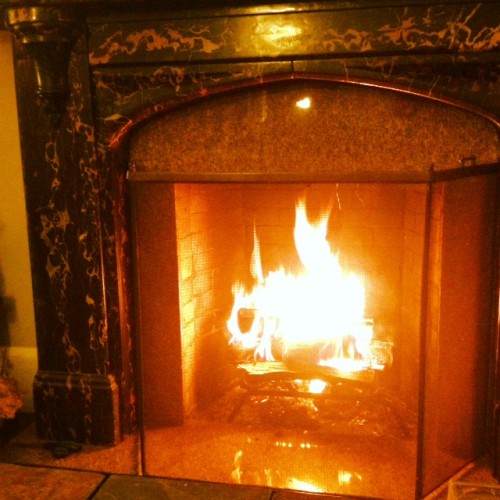 I like it here, despite the fact that at the moment it involves lots of cardboard boxes and piles of packing paper and I haven’t unpacked my books yet.

But nice men came to take my too-big-for-the-elevator sofa apart and reassemble it in the apartment and you can’t even tell, and also the kitchen is mostly unpacked and the internet works, and also, fireplace, so it’s working its way slowly towards comfortable.

I didn’t think I was a Manhattan kind of girl, but I knew I wanted to try a new city and this one ended up being the logical choice. I’m here frequently anyway, I know it fairly well though I suspect it will always remain a mystery.

I am looking forward to exploring. Especially restaurants.

It’s hard to believe 2012 is over. The world didn’t end, though as I remarked last year, ends feel an awful lot like beginnings, and this year was a lot of new beginnings for me. So I suppose it makes sense to say goodbye to 2012 in a new place, watching logs and paper and bits of dried evergreen burn merrily away.

This year was about discovering classic cocktails and swimming in the ocean for the first time in years and finding out that the best potato chips in the world are in a hotel bar in Toronto.

I felt tired for a great deal of this year. I still feel tired, but so far it looks like I’ll be able to rest a lot more in 2013. And hopefully write a lot more, too.

No real resolutions, speaking of. Read more. Write more. Let myself be happy.

Last New Year’s Eve I had a rather terrible evening. I hoped then that this year would be different, and while it is more different than I anticipated it is also even better.

I didn’t have a distinct song of the year this year. This year was a lot of songs. A lot of jazz and a lot of Bon Iver and Florence + the Machine, Of Monsters and Men and Andrew Bird. This year was Dave Brubeck’s “Take Five”, for so many reasons.

So I thought about what song feels like right now, and while I had a few possibilities I kept coming back to this one, which I fell in love with last year and danced to live in Toronto this year and seemed right, right now.