this started out about spaces & then became about writing & life

I did get back to The Evolution Store to get antlers for the fireplace. (Also got a quartz cluster that is sitting on my desk next to my statue of Thoth.) 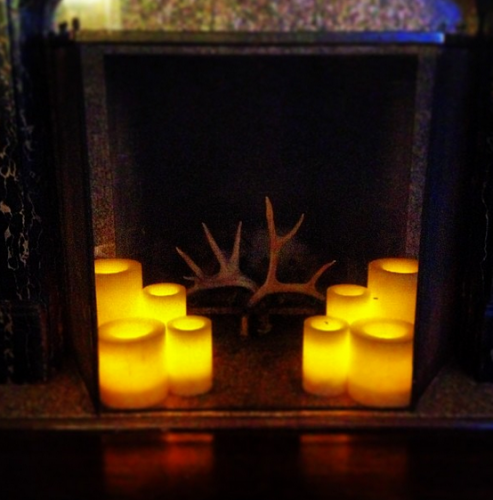 It took me several tries to get the antlers to sit properly but then they just settled like that and looked perfectly at home and almost flame-like. I do think I’ll add ribbons or such eventually, but for now they look lovely unadorned in the flickering glow of the ersatz candles.

I am especially pleased with this as the fireplace was one of the only empty-feeling pockets left in the apartment, probably because it usually didn’t have a fire in it. It’s right in the middle of the living room so it was a bit like a central abyss and it feels much more finished with stuff in it.

It seems like it took ages to move past the cardboard box missing furniture stage of the moving, and other than a few little things (like antlers) the whole space is feeling properly home-warm and cozy. There’s a lot of green and blue and the bedroom ended up with a subtle honeybee theme, but the overall look is a little bit industrial, a little bit vintage, a little bit art deco in a Bioshock sort of way. (I am still on the lookout for an antique diving helmet.) (Also our bookshelves are already operating at capacity and eventually we will need new ones.)

It feels more like home than any space I’ve lived in for a very long time, which is refreshing and happy-making.

I like creating spaces, though most of them are imaginary. I’m still in architect mode with the new novel and it’s nice to have a real space to decorate and develop a lighting scheme for. I have a lamp that will probably find its way into the book somewhere. Not sure if there will be antlers anywhere, might save those for a different story.

There’s a lot of new (some of it is old and new-to-me) in this space which I suppose is good for trying and writing new things. Not sure I would have thought to put antlers in a fireplace before but I wanted something to fill it and I was thinking of branches and then thought antlers would be more interesting.

That’s a sentiment that could be applied to a great many things, actually.

I’m still trying to work with so much new on so many levels in such a comparatively short amount of time. It’s disorienting, sometimes, trying to learn out how to live and work in a completely different way. I don’t know what works and what doesn’t for me now yet so I’m trying new things like honeycomb rugs and writing longhand and drinking lots of yerba mate.

Figuring out how to fill abysses both real and fictional with the right combination of antlers and light.

Looking for the new ideas that will lead me to the right ideas.