I keep forgetting to blog. I used to blog so often that I had to grasp at things to fill up spaces between flax-golden tales and now there are so many unblogged about bits and pieces piling up that I don’t know where to start so I don’t and then nothing gets blogged at all and the pile gets bigger. Attempting to toss some things on today, so this will be very much all over the place.

(Part of it is also that I don’t have Official Author Things to blog about. There’s either no new news or no sharable news, etc. I’m not doing any events. Whenever there is bloggable book news it will be blogged, I assure you. In the meantime, thank you for reading all of this nonsense.)

A few weeks ago I was a clue in the New York Times crossword puzzle. 135 Across. 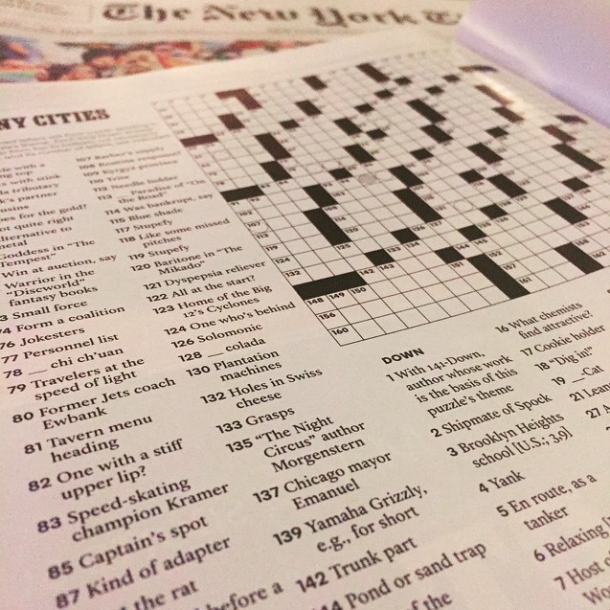 Which was odd and cool and not something I’d ever thought possible. We went out and got a copy to keep that will probably remain blank because I am not good at crosswords. (Maybe I should just fill in the ERIN.)

I asked Twitter for potential things to blog about* and one of the suggestions was about my Twitter hiatus and how well/not well it went. I was on Twitter hiatus from November-April (I’m still not checking it as much as I used to) and I think it was really good for me. I have a few different social media things I try to keep up with but Twitter is the most active & time consuming. My Instagram & Tumblr are a little more on the pretty pictures & retumbling passive side, which is better for me when I’m working. Having all the Twitter connections and voices is tremendously awesome but not so much when I’m trying to pay more attention to the voices in my head. That came out wrong. But still, it’s very outward when I need to be inward at the moment so the hiatus was valuable and I will probably do it again toward the end of the year.

I am mostly writing right now, or working rather because I am not a write-every-day writer, I am a live-in-the-book-regardless-of-wordcount every day writer. So I alternate days with a lot of words and days working out character things or plot things or imaginary architecture, sometimes with pens in notebooks and sometimes just in my head, because if I have those things worked out the word days end up filled with more useable words.

My writing music at the moment is atmospheric & electronic & classical. Smitten with the Max Richter recomposition of Vivaldi’s Four Seasons. Currently listening to Forest Swords. Brand new Florence + the Machine and Of Monsters and Men albums are also on heavy rotation.

I have not been reading much, which always happens when I’m writing more. I tend to like absorbing story in non-text formats when I’m working on my own writing so I end up watching more tv and playing more games. Earlier this month I binge-watched the first three seasons of American Horror Story which I had never seen and now I wish I’d started sooner. Still haven’t seen Freakshow and looking forward to Hotel because I have a thing for hotels.

I don’t even want to talk about Game of Thrones. I was glad I had a lot of wine.

I got a new bunny friend because I couldn’t leave the store without him. 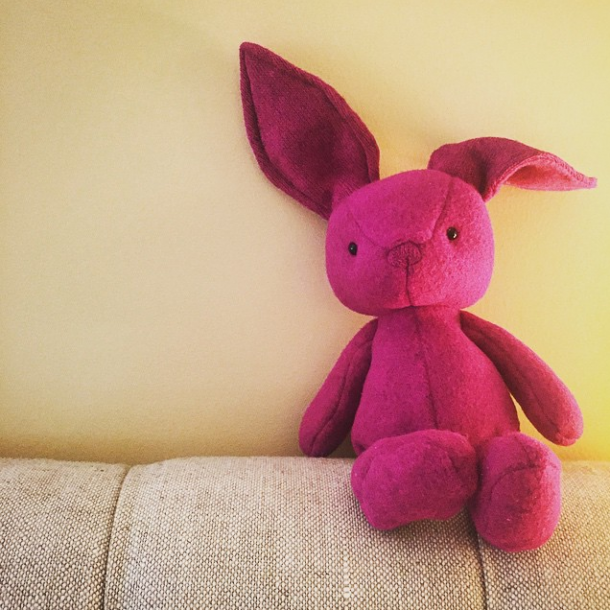 The apartment has an awful lot of bunnies now.

I’ve been trying to keep up with the E3 press conferences as much as I can but I wasn’t really excited about anything until last night’s Sony conference and then it was ALL EXCITEMENT with some extra shooty things I don’t care about. (Particularly interested in The Last Guardian & Horizon and really intrigued by dreams.) In related news I now I have surround-sound headphones that I got mostly for game-related purposes and I love them.

I am realizing I might not be blogging that much lately because I’m boring. I’m also hot, which doesn’t help anything. Despite being born in the summer I am not a summer creature, humidity makes me sleepy and I burn easily and our air conditioner is broken.

Someone is coming to fix the air conditioner.

Someday there will be book news and sharable things and excitement, I’m sure. I’m in hermit mode which does not lend itself well to sharing.  I am writing a lot and switching things around and finding structure and it is finally actually getting somewhere this time. There are people in my head I would like for you to meet but I have to follow them around awhile longer first.

The air conditioner repairperson came while I was writing this and it’s not a problem with the unit, it’s something electrical so I am apparently going to remain hot for awhile.

This post was even more all over the place than I’d anticipated.

I am an introvert who occasionally pretends to be an extrovert and then other times I forget how, even on the internet.

Doing my best but really need my attention focused elsewhere lately, hope you all understand.