Today is my half birthday. I am 33 and a half. I usually say I should have half a cake, which we would sometimes have when I was growing up as my sister and I have nearly exactly six month apart birthdays (her proper, not-half birthday is on Tuesday) and that way there was less cake-based birthday jealousy.

I thought about just getting myself a cupcake but instead I made gluten-free brownies, added an extra egg to make them more cake-y and crumbled caramel-filled chocolates both mixed in and on top and then sprinkled the whole thing with sea salt for good measure. 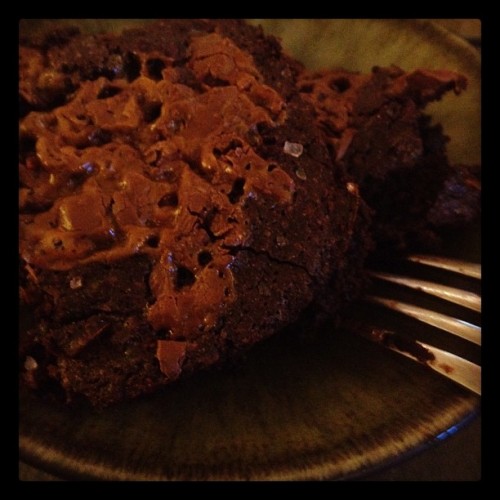 So I have half-birthday chocolate salted caramel brownies and new Downton Abbey later and I am a fairly happy pumpkin, as 33-and-a-half year-old pumpkins go.

I am taking a pseudo internet hiatus this week so I can catch up on things and read noir novels and regroup and hopefully get some actual writing done. I’ll also be working on two long involved posts that will likely end up being a combined FAQ-esque thing. I’ll be checking personal email but little to no Twitter and no blogging save for Friday’s flax-golden (though I’ll be doing some blog-related housecleaning, still not sure where all the comments from the beginning of December went) and no wasting away my time in the wilds of the internet.

So I’ll be around but not as around as usual, I guess is the point. This is mostly to keep myself from wasting time watching cute cat videos and online shopping. (I will be making an exception for BPAL‘s impending Lupercalia update, though, of course.) I probably didn’t even need to tell you this as it won’t be all that obvious a hiatus but I wanted to share about the brownies and figured I’d mention it.

And now I’m babbling so I am going to go nibble on brownies and try not to feel old.

Brownies are a fabulous half birthday treat. I don’t even know when my half birthday is. I’m a big fan of internet hiatus’. Have fun.

Mmm chocolatey-chocolatiness. Enjoy your internet break! And thirty-three and a half isn’t even close to old 🙂

Ooh, they sound fab, don’t suppose you want to share recipe with a gluten free newbie. Will swap it for a delicious GF chocolate cookie recipe I found!

I am still only dipping my toes into gluten free baking, so things with mixes are my friend.

My gluten-free brownies are requested by non-gluten-free friends. I add an an entire package of dark chocolate chips to whatever gf brownie mix I have on hand. They get really rich and gooey! Sometmes I hadd chopped nuts for extra crunch – but there is something wonderful about soft very chocolate brownies.

Jealous about the yummy brownies! I didn’t even think to celebrate my half-birthday, and now it’s almost a month past (would have been December 2). Perhaps a late half-birthday party is in store. Happy January, Erin!! Love.

Happy Half-Birthday Erin!
I am just about to finish your book and I beg you ~ to do what ever it is, you need to do, to have the time and desire to write another.
I Love Night Circus and don’t want to leave it.
Thank you so much.

I just finished Nightcircus, on your 1/2 birthday eve! Loved it!
Keep going, I think you will do great things, I look forward to reading the next one. And my little family and I are hooked on Downton Abbey- so visually stunning, like your novel. Cheers!

I am enjoying a huge piece of your cake, vicariously. Delicious, and zero calories. Happy half b-day!

Am looking forward to seeing Downtown Abbey once they finish the series and put it out on dvd. That way I can suck it down five episodes in a row, if I like. No boundaries. Kind of like vicarious cake for the eyes.

Just watched the season finale of LOST. Cried my damn eyes out the entire show. Then we watched the special features, and I cried my eyes out through those, too (when Hurley reads his final scene script and starts crying??? GAHHHHH!). Egads, what a great show. I will miss those characters like friends who moved away.

P.S. Forgot to ask you if you’ve seen “Cranford” and “Return to Cranford”. Two gems there… Judi Dench and Imelda Staunton, among others!

Oh, know of them but haven’t seen, I should add them to my to-watch list.

I half-heartedly wish you a happy brithday.

I was hoping you were older, I don’t know why. Actually I do know why but I’m not ready to admit it yet.

I’m sorry your half-birthday (we call it an “unbirthday”) falls so close to the holidays; I imagine it’s easily overlooked.

My birthday was on the 4th, and I made myself a three layer dark chocolate and salted caramel cake. We are apparently in the grips of a delicious food trend. Since my actual birthday is Jan 4th, my half birthday is July 4th… when I was little I thought the fireworks were for me. I still like to pretend they are, at least all the purple ones.