I just got a box of books from Amazon, most of what I bought with my birthday Amazon certificates, though a couple more are arriving separately. Amazon is tricksy like that. And one can never have too many books.

But yay, books! I decided to stack up most of my to-read pile, consisting of this order, my last Amazon order, and another birthday book. 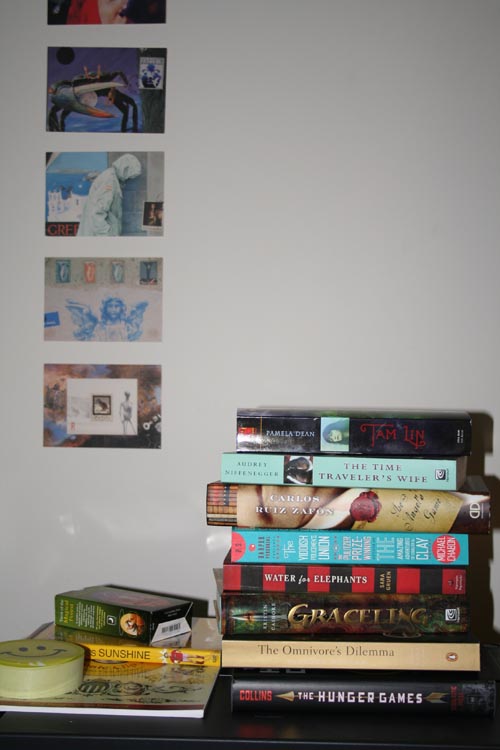 Mmm… books. This is probably pretty indicative of my taste in books, too. And it pleases me that this pile is oddly color-coordinated. Not sure what order to tackle them in, though. I’ve started Tam Lin but haven’t gotten very far, and I’ve wanted to read Graceling & The Hunger Games for ages. I might make tea later and read the first few pages of things and see if anything refuses to be put down.

(Also in this photo: several Nick Bantock postcards, Little Miss Sunshine, a Treasury of Victorian Designs & Emblems, the Tarot of the Magical Forest & a stack of happy-face Post-its. Cause this is the kind of stuff that collects on top of my printer. Except the postcards, the wall is their natural habitat.)

And of course, since I have a now-bookless Amazon box, it is currently full of cat: 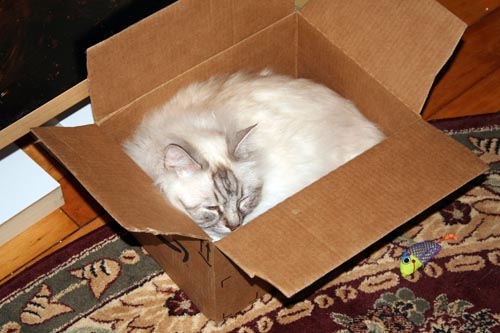 Though since I took that photo Tessa has curled up to the point where her head is no longer visable and it looks like a box full of fur.

Awww, Tessa! I love the idea of a box full of fur. Lovely cat.