I spent a large portion of the afternoon mesmerized by the shininess of the Apple iPad. Even though it has a horrible, horrible name. For about an hour I seriously considered getting one, since we were planning on replacing our MacBook later this year anyway and we don’t use it for that much. And it seemed like it would be a good happy medium between my iPhone lust and my AT&T loathing.

And then I realized since it’s app-based I can’t really do anything useful on it and would be deprived of my beloved Scrivener. So I am going to have to ignore the shiny for now. Someone call me when it runs OS X.

In better news, I tested USPS requested package pickup today and it seems to have worked just fine, so I now have an alternative to walking to the post office in the snow when I have something larger than print envelope sized to mail.

And we are rolling toward the end of our epic LOST re-watch. Season 5 is a lot more, um, inconsistent than I’d remembered. Still good, just missing something. But I know the finale will make me cry again, so maybe I’ll forgive the inconsistencies in a few days.

Still in revisionland, of course. I’m not sure I’m going to have a finished(ish) draft by as early in February as I’d wanted, but it’s starting to look novel-shaped again, which is something. It still needs massive amounts of work but the structure is getting there and that’s making my brain hurt marginally less. 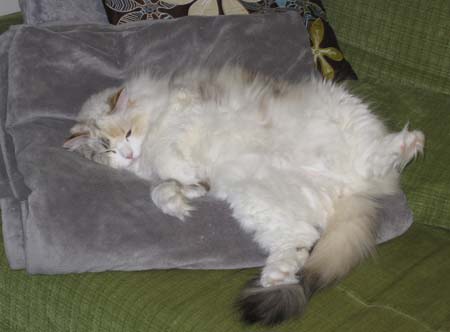 I know, I’d been hoping for something more from the iPad, too. I’m sure it’s lovely, but it’s not something I need.

Yay for the USPS thing – that sounds all kinds of better, and not just for snowy weather!

I’m glad the revisions are making progress. If you’re pleased with them, and it feels like you’re heading in the right direction, then it’s worth the time. Though how you can manage to concentrate when you have such cute cats is beyond me. 🙂