You may have seen me on Twitter bemoaning the fact that I only received one book as holiday giftage. (Technically, I got two. I received one after the bemoaning.)

Obviously, two is still not enough books. So despite the sorry state of my to-read shelf, I bought myself some pretties. 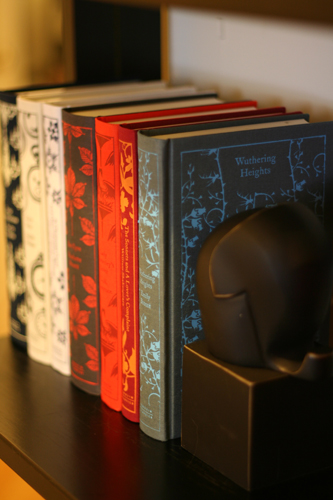 I have coveted the Coralie Bickford-Smith-designed Penguin Classics since I first saw them, so this is the beginning of what I’m certain will end up being a fairly large collection. They are so pretty, and there are so many classics that I’ve really wanted to own but lost the beat-up high school English class copies years ago. These are much better. 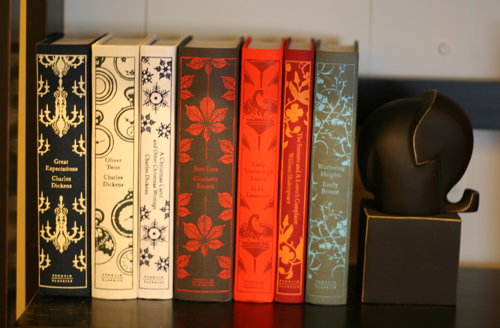 (Also featured in these photos is one of the marvelous bookends my sister gave me.)

I already want more because they don’t fill the whole shelf, even though the elephant is doing an admirable job of keeping them upright. And I’m annoyed that the Fitzgeralds don’t seem to be easy to find in the US, because they are swoon-worthy.

Ooh, those are *nice* editions! Really nice. Good luck with finding more – that’s a lovely thing to be collecting.

“an incredible stand-out piece of debut fiction” Hee, indeed. Also, awesome – both that it’s happening, and you.