This time Book Expo America was the first book world thing that I’d done before. Last year’s was Baby’s First Book Event, so this year was deja vu all over again. (BEA 2011 was recapped epically here & here. This post will not be as epic.)

The weather yet again toyed with me but I managed better this year. Last year as I was packing it was freezing in Massachusetts so I packed boots and things with sleeves and then in NYC it was roasting hot and humid. This year I kept looking at the ever changing weather and even though I waited until the last possible minute the weather report was still daunting, 60s & rainy predicted for pretty much the whole week. I packed sandals and things without sleeves and layers anyway, and I think in retrospect I succeeded admirably.

I did need my one dress with sleeves for the Knopf Doubleday party, which was lovely and I got to see lots of lovely booksellers (including ones I’d met before, which was something akin to having familiar books on shelves only with more hugging) and I got to meet Ian McEwan and Chris Bohjalian and Deb Perelman of smitten kitchen. (People kept explaining to me who Deb was and I kept telling them that I already knew & I’m delighted that I got an advance copy of her cookbook. The party food was all from her book and oh, so delicious.)

It was a busier night than I’d expected and when squished in the middle of the crowd I momentarily regretted the dress with sleeves decision but overall it was splendid if slightly surreal, since it was held at the same venue as last year when I was overwhelmed and scared and still trying to wrap my head around the fact that people were reading my book already. I had feathers in my hair and they managed to stay there through the entire evening. 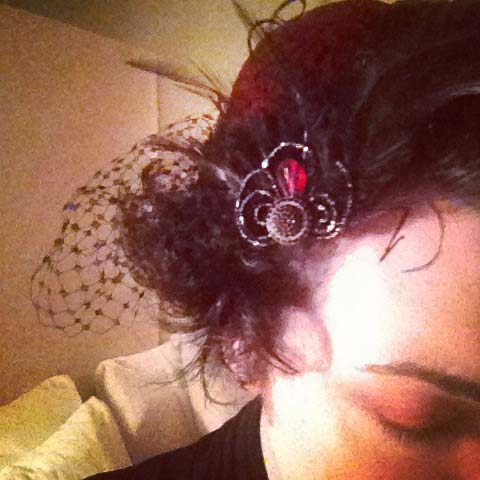 The next day was my proper busy BEA day and I got to wander the Javits a bit before my signing, just to soak in the bookishness. My dress was very pale pink, to mess with the circus color scheme system.

Minutes before my signing I found out that Ray Bradbury had passed away. And while I was still mid-sad face I was asked for a response by USA Today which is how I ended up sad-face babbling about Something Wicked This Way Comes and quoted in their article. I never met him, but I’ll miss him. He lived on my bookshelf. He still does.

I truly wasn’t expecting my signing to be that busy, being last year’s news and all, but to my surprise there was a huge line. I was signing freshly baked paperbacks: 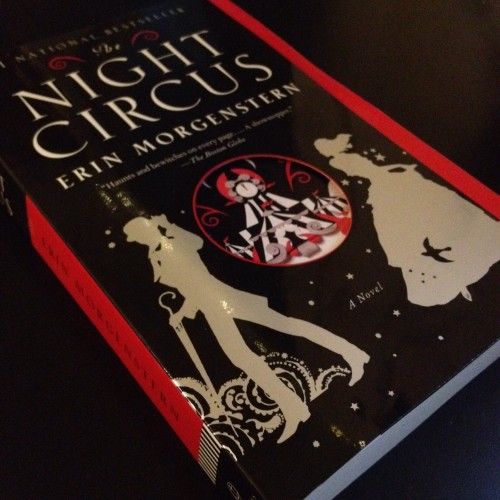 A gigantic thank you to everyone who stood and waited. Last year was a bit overwhelming and of course most people hadn’t yet read the book, so it was wonderful to re-experience that with more signing experience (if anyone has a 2011 & 2012 version to compare you will likely notice that my signature has lost several letters and become more glyph-like, though I am still crossing the t) and with more people having read the book. Someone did ask me what it was about and I think I looked at them funny. Sorry.

After my Random House booth signing I went and signed things at the Librarian’s Lounge which was apparently a corral for librarians in which librarians were given cookies and allowed to sit, which seems like a good deal in the middle of the Javits. We ran out of books which I felt badly about but it was lovely to meet so many librarians and be allowed in the librarian-only lounge, I felt special.

Then I went and had sushi with my editor and thought about going back to the Javits afterwards but then taking off my shoes was more appealing.

This is my fairly modest book haul. I had some help with it since I was busy and trying to focus in the sensory overload wonderland that is the Javits Center during BEA is not my strong suit. 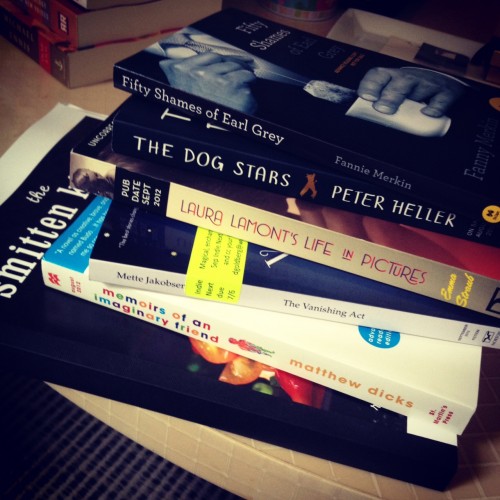 I’ve read (and adored, as you’ll be able to tell from the quote on the cover) The Vanishing Act by Mette Jakobsen which is a debut novel that comes out in September. The rest will be added to the ever-growing to-read pile but hopefully I’ll have some time over the summer to curl up and do nothing but read.

Let’s see, what else did I do during the whirlwind that was BEA?

I had drinks with my US editor and my Canadian editor at the same time. I’ve never even seen them in the same country before so that was all looking-glass magical.

I wanted to get back over to the Javits again just to wander more but I never had time, unfortunately. There were many people I wanted to say hello to and never got the chance.

I went to see Sleep No More for the 10th time. The nurse whisked me away and locked me in a room and wrapped me in a blanket and I promised not to tell what happened after that. It was just as wondrous and dreamlike as always. I keep saying I don’t have to go back but then I always find myself back at the McKittrick Hotel again.

Also, I broke my eyeglasses. Not sure how I managed that but they’re missing a screw so I need to get them fixed. In the meantime I have my old ones with the only slightly out of date prescription and my contacts.

So, that was my week. It seemed longer and busier but there were also meetings and drinks and dinners (Alta has the best tapas and also really strong sangria) and the sun did stay out most of the time. It was strange and lovely and felt circular in a lot of ways, having a whole year of this being an author thing. Still don’t really have the hang of it but I think I’m getting better.

Until next time, BEA. 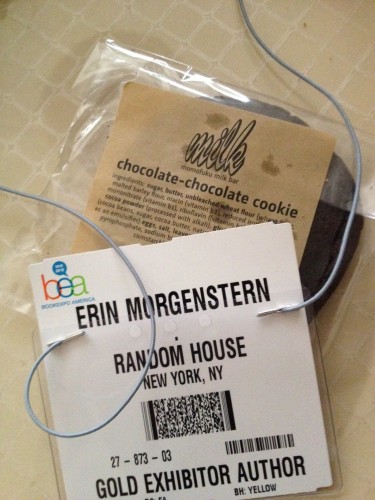 I was so happy to see you again at BEA. I got The Night Circus last year too and it was one of my favorite books of all time. I need to go see Sleep No More again as well!

I think I know what I may be giving my husband for his birthday this year….

Oh, and since you’ve been so many times…. would you recommend going to “Sleep No More” on a weekend night when it’s likely to be more crowded, or on a weeknight when there may not be as many people? Or, as nearly all the performances are sold out, that may not be an issue.

I did notice the weekend performances stay open much, much later though…

So – which would you recommend? Weekend or weekday?

I’ve only been on weekdays and if my last visit was any indication I think they’ve lowered the capacity, it definitely seemed less crowded. I believe on weekends they actually do two shows, so they’re the same length but you’d go to the early or late version. I think.

And almost every show I’ve been to has been sold out, but the nice thing is if you get to a room that you deem too crowded you can go somewhere else instead!

Hey, thanks for the insight. Also wondering how the story of MacBeth gets told, if you don’t have to go in every room at a given time… does the “play” have a beginning, middle, and end? I mean, do you come out of there with a story line? If you went in there and just stayed in one room the entire time, would you just see the actors doing the same thing over again as new people came in the room?

It is one of those things that’s very hard to describe how it works until you’re in it, but it’s not that difficult to get the hang of it once you are. The MacBeth storyline is a bit abstract and also goes in loops, so if you follow one of the main actors you get more of the story, but it’s possible to miss that storyline entirely. It does have a proper finale at the end of the night. My best advice is to just go and abandon whoever accompanied you there immediately and explore, and if you want to follow someone, follow them. My first visit I knew absolutely nothing about what to expect and I had a fantastic time.

Thanks, Erin, for the recommendations and the feedback. I’m going to take my husband for his birthday next month. So excited!!!

FINALLY read “The Night Circus” (books on my beside table have to wait their turn in line and sometimes it just kills me), and I just wanted to let you know that I LOVED it. You are such a talented author! You imagery and flow of words was so beautiful sometimes I would stop and re-read a sentence because I liked the sound of it so much. I hope you are hard at work on your next book, because I can’t wait to read whatever you have in store for us next.

What a lovely BEA haul!

I’m headed to Sleep No More for the second time for their Fourth of July picnic and cannot wait. I wished I lived closer to New York to see it more often.

If you haven’t had the marshmallow-chocolate-cornflake Momofuku cookie, I’d highly recommend it.